Nathan Holman’s fine run in the UK continues after securing a top-5 finish at the St Andrews Links Trophy in Scotland on Sunday.

Holman finished at 3-under along with Jordan Zunic, the Aussies three behind the winner England’s Neil Raymond. 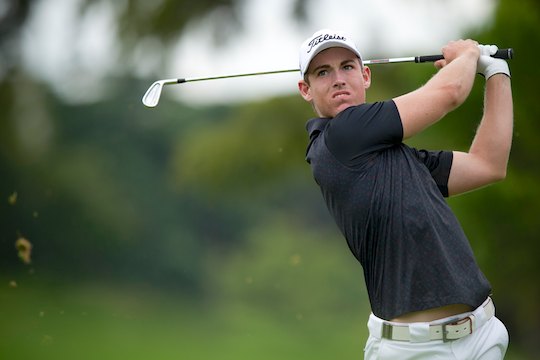 His world ranking has climbed nine places to sit at 61st, just outside the desired top-50 placing that gains automatic entry into the US Amateur Championship to be held in August.

Three Englishman, Nathan Kimsey, Ryan Evans and Max Orrin finished in a tie for runner-up at 4-under.

The remaining Aussie to make the cut was Todd Sinnott, who finished at 11-over-par.

Generally the Australians have not faired well so far in the UK.

Holman has been the most consistent of the Australians as he goes in search of his first international title after bagging numerous top-tier events back in Australia.

Eleven Aussies will line up for the British Amateur starting 17th June at Royal Cinque Ports Golf Club in Kent and Holman’s form is certainly shaping up nicely for this ‘major’ of amateur golf.

Watt has struggled since arriving in the UK with the world number three having a disappointing start at the Scottish Open Stroke Play Championship and now missing the cut at St Andrews.

Cameron Smith will also be kicking himself after missing the cut at St Andrews, yet both Smith and Watt are seasoned campaigners and have the capacity to rise in bigger events.

Both certainly need to bank a solid result at the British Amateur before heading to the US to gain any traction for this 2013 season of international events.

Winning events in Australia is one thing, but the real litmus test of where players stand is with banking results in the top UK and US events where the fields are much deeper and the stakes much higher.

Kieran Pratt, a regular on the Asian Tour did this at the Western Amateur back in 2010 making the semi-finals only to narrowly miss a place in the final – losing on the 18th. Pratt also made the cut in every international event he entered that year, both in the UK and US.

Matt Griffin won the US Rice Planters championship in 2006 and since has been a multiple winner on the OneAsia Tour.

Last year Daniel Nisbet won the US Players Amateur – only the second Aussie to win the title after Aron Price, who then went on to gain his US Tour card.

These are just a few examples of Aussie amateurs who have gone on to the professional ranks with solid international amateur wins to their credit.

The Aussies have less than a fortnight to get prepared for the British Amateur. For some there is still a lot of work ahead.