Lee, who won his first title on the KPGA Tour last year at the Kolon Korea Open Golf Championship, said he was happy to prove that the first win wasn’t just a fluke. 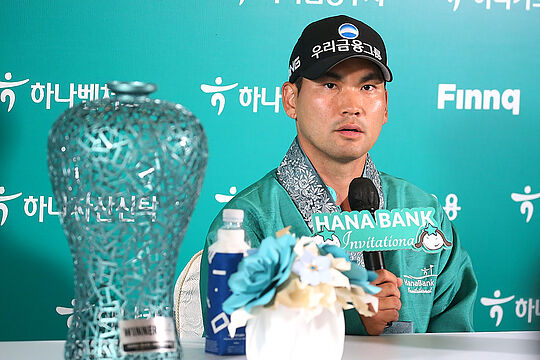 “It’s as thrilling as the first win. I was thirsty for the win because I wanted to prove that the Korea Open last year was not just a coincidence. After winning the first championship, I felt a lot of shortcomings as I played a lot of matches with players competing for the title. I don’t have a coach right now, so it took me a while to correct and supplement the shortcomings by myself,” said Lee whose 21-under total matched the record set by Park Sang-hyun in 2018.

“It was really nice to be able to show a proud figure holding a trophy in front of my son (Joowon) and daughter (Juah). I feel like I have to work harder. Thank you for cheering to the many galleries.”

Lee began the week with a bang, carding a 6-under 66 including seven birdies to share second place, which he would hold on to for the next two days thanks to rounds of 4-under 68 and another 6-under 66 before wrapping up the week with a hard-fought 5-under 67.

The 34-year-old has found winning form at the perfect time with the defence of his Korea Open title due to tee off on Thursday at Friendship Hills Country Club.