After the delight of sharing the first round lead, Marc Leishman now carries an added burden into the closing three rounds of this year’s Masters.

Leishman, 29 posted easily his best score in three rounds of Augusta National in carding a six under par 66 before being joined by Spain’s Sergio Garcia.

Garcia’s round of 66 is the first time since the third day of the event in 2002 he’s gone without a bogey in the year’s first Major.

However, while Garcia seeks now to become the third Spaniard behind the late, great Seve Ballesteros and Jose Maria Olazabal to be fitted with a green jacket, Leishman now will carry the entire weight of the Australian continent on his shoulders as the island nation looks to win the Masters for a first time.

Of course, Greg Norman went close in 1986 losing to Jack Nicklaus and then a year later when Larry Mize pulled off a career chip shot in the play-off. 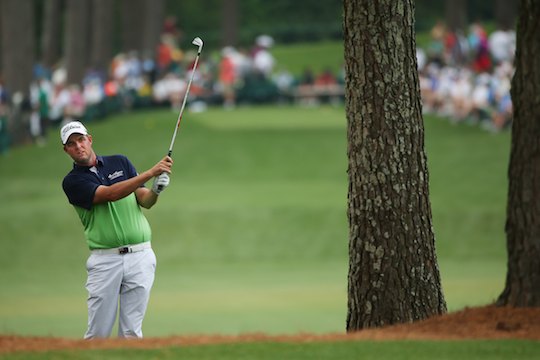 Australia’s Marc Leishman shares the first round lead with Sergio Garcia following an opening round 6-under 66 (Credit: Getty Images)

Then in 1996 Norman went into the last round leading by five but losing by seven to Nick Faldo.

And after both Adam Scott and Jason Day finished tied second two years ago, Leishman has now stepped forward to try and break an Augusta Aussie hoodoo.

“Every kid growing up wants to be here,” he said.

“The first time I was here a few years ago, I was like a bit of a deer in headlights, I guess.”

“I found myself looking around a little bit too much and not concentrating on getting the ball in the hole, which is what you need to do.”

“So to be here is awesome and to be sitting here is pretty cool. But, you know, it’s only Thursday afternoon, so a lot of golf to play. But I feel good about my game.”

And it didn’t take long, and in fact it was only the second question in his interview, that Leishman was asked about Norman.

“I watched Greg’s collapse here in ’96 and it was disappointing for, well, obviously for him, but that’s golf,” said Leishman.

“Having come here now and played this course a few times, I can see it can happen. Like you can see how what happened, happened.”

“It’s not that bad a score on probably Sunday conditions. Obviously Faldo played awesome. But you know, that’s life I guess. I don’t know what else I can tell you about that.”

Leishman, who hails from the rural Victorian State town of Warrrnabool, earned his place in a second Masters after capturing last year’s Travelller’s Championship in Hartford, Connecticut.

And Leishman will now draw on that success, his only PGA Tour win, in trying to become the first Australian to be fitted with the most sought after item of clothing in golf.

“Winning Hartford changed a whole lot as I knew I was good enough to win,” he said.

“But you know, everyone still stands on the first tee Thursday morning on zero, so you’ve still got to get the ball in the hole. And anyone on any given week can win.”

“You know, it’s nice to be sitting here, and you know, hopefully I can be here later in the week.”

“But it’s win a golf tournament. I think leading, coming towards the end of a Sunday, it’s easy to get defensive. I’ve come from behind in a few tournaments, and I guess a little bit like today, I can get on a run of a few birdies in a row, and it was good to know I could do that at Hartford, and I was able to do it, which was awesome.”

2012 Open Championship runner-up, Adam Scott, closed his first round at 3-under, which included a lone bogey at the par-5 second hole.

Fellow Australian, Jason Day, is a further shot back at 2-under alongside four-time Masters champion, Tiger Woods.

John Senden kept his hopes alive with a even-par round to close the day in equal 34th position.

Senden is in good company with world number two, Rory McIlroy, limping his way to a round of 72 with five birdies matched by five bogeys.