Aussie Macpherson in British Am final

Bryden Macpherson has advanced to the finals of the British Amateur at Hillside north of Liverpool and will play Scotland’s Michael Stewart for a place in history, a start at next month’s Open Championship and a start at the 2012 US Masters.

The US-based Macpherson progressed to the championship match with a 2&1 quarter-final viceroy over Spain’s, Antonio Hortal, and followed that with a 4&3 win against Englishman, Greg Paterson in the afternoon semi-final. 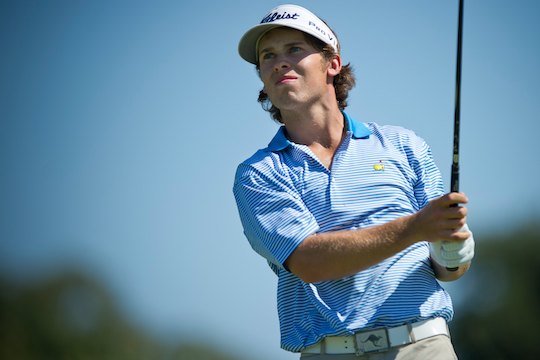 Stewart’s progress was at the expense of one of the tournament favourites, world number 3 England’s, Tom Lewis, with a solid 4&3 win in their quarter-final and then the Scot later disposed of France’s, Sebastien Gross, 5&4, in the semi-final to tee up the championship match against Macpherson.

The last Australian to reach the final of the British Amateur was Tim Stewart in 2007, with the Aussie narrowly going down to American Drew Weaver, 2&1 at Royal Lytham & St Annes.

In its 126 year history, the British Amateur has evaded Australian hands for the last 57 years with Douglas Bachli the last Australian to claim the title in 1954 at Muirfield. Jim Ferrier in 1936 was defeated in the championship final.

This places Macpherson, who is based at the University of Georgia in the US, into esteemed company as one of only a handful of Australians to play the final of the British Amateur.

“It was really tough today, but patience has been the key. I’ve stuck to my plan, kept doing what I do and trying not to force it. This is my third Amateur Championship, and I would not miss this event for anything in the world. It’s the best amateur event there is. You can’t ignore the history of the R&A.”

Macpherson has won internationally before. In 2009 he collected the New Zealand Amateur stroke title the same year he won the Australian Amateur stroke championship. His maiden top amateur win was at the 2008 Dune Medal where he scorched the demanding Dunes Links layout with a course record third round of 63 before going on to win the National Trial event wire to wire.

Since then, Macpherson’s game has gone from strength to strength, a product of his own self belief and application within the tough US collegiate circuit.

“The Open is my dream tournament,” he says.

“As the title suggests it’s The Open, and if I could choose to win just one event in my life, I’d choose that one. But I won’t be thinking about that tomorrow.”

Macpherson came in to this week’s tournament in fine form, having hastily left the US after playing a pivotal role for Georgia in the Division 1 NCAA finals at Karsten Creek when others this week had played the St Andrews Links Trophy in preparation for these championship.

Macpherson played stellar golf during the NCAA finals for Georgia and secured the opening match for his team in the final against Augusta State with a 6&4 win over Olle Bengtsson.

Georgia would eventually fall to the defending champions in the final, yet Macpherson’s match play during the series was simply majestic at 3-0.

It would be an indication of what was to unfold across the Atlantic, yet following yesterday’s semi-final victory Macpherson was remaining coy.

“If you told me at the beginning of the week I would be playing the final, I would not have believed it,” were Macpherson’s remarks.

Those who know Macpherson and have seen him progress through the top amateur ranks appreciate his talents and know he is a tenacious competitor.

The cool exterior displayed on the golf course is underpinned by a self belief that he can win.

It’s an attribute that will undoubtedly serve him well against Stewart in tomorrow’s championship match at Hillside.

Stewart will be no easy pushover with the Scot himself a steely competitor.

Stewart is currently ranked 11 in the world and won the South African Amateur earlier in the year to add to his Scottish Amateur title.

For Stewart, a place in these latter stages of the championship was very much part of the pre-tournament plan. His preparation for this British Amateur was in stark contrast to that of Macpherson.

“You don’t enter an event unless you want to win and I’m here to win,” said Stewart following his quarter final win over Tom Lewis, the Scot’s second win over the world number 3 after winning 3&2 at the Home Internationals last year.

“My ball striking has improved as the week has gone on, and I’m starting to feel a lot more comfortable. This and the US Amateur are the two most important events in the calendar. If you win the Amateur Championship, it’s life-changing.”

For the two finalists they find themselves 36-holes away from two Major Championship opportunities, which certainly will be life-changing.

Should Macpherson be the holder of the title come Saturday evening it will also signal a change in Australian Amateur golf.

The British Amateur championship title has evaded Australian hands for too long and it would be fitting for a talent like Macpherson to be the one to change the history books.