David Micheluzzi secured a tied third place finish at the Scottish Men’s Open Championship at Western Gales in an impressive start to his 2017 UK tour.

Micheluzzi fired rounds of 67-68-69-75 to finish at 5-under and four strokes behind the outright winner Scotland’s Liam Johnston. England’s Matthew Jordan was second at 7-under par. 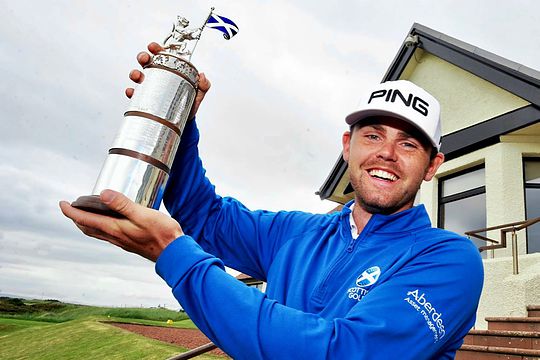 “Well it wasn’t the result I wanted but I’m very happy to come third at the Scottish Stroke play,” said Micheluzzi.

“It wasn’t the best ball striking week but that’s links golf, you can get away with not hitting it your best and still score. Next up is St Andrews links Trophy which is one of my favourite tournaments of the year, it starts Friday and hopefully I can go two better.”

Johnston, who joins a winners’ list that includes recent champions Andrew Sullivan, Tommy Fleetwood and Richie Ramsay, birdied three of his first six holes in the final round to storm up the leaderboard and was able to hang on to collect his second main international trophy having won the African Amateur at Leopard Creek in March.

“It was just a grind all day, to be honest,” he admitted. “It was a windy all day, especially on the back nine in the final round.”

“I feel like this game, once you get to the upper levels, is all about self-belief and knowing you can do it. The win earlier in the year in South Africa definitely helped me to stay calm today.”

A number of Aussies had their first tournament hit out in Scotland for the 2017 season bagging mixed results.

Harrison Endycott missed the 2-over cut mark by a stroke with Alexander Henderson three behind at 5-over. Blake Collyer was at 8-over, James Grierson at 11-over and Zach Murray at 13-over. Will Heffernan rounded out the Aussies at 15-over.

Charlie Dann, who won this year’s Australian Master of the Amateurs, Australia’s highest ranked amateur tournament, makes his first UK appearance for the season along with reigning US Junior Champion, Min Woo Lee.

Keep an eye out also for Dylan Perry who is coming off an impressive 2017 Australian summer along with Blake Windred, who recently won the St Michael’s Cup in Sydney.

Since its inception in 1989, the St Andrews Links Trophy has attracted the world’s top amateurs, many of whom have gone on to enjoy success on the PGA and European Tours, notably Ernie Els, Lee Westwood, Trevor Immelman, Geoff Ogilvy, Padraig Harrington, Justin Rose and Rory McIlroy.