The marathon US Open 36-hole Final Qualifying has come to an end with just one Australian making it through the gruelling one-day event.

You could be forgiven for thinking 47-year-old Steve Allan had long since retired from golf but the 2002 Australian Open winner has been quietly plugging away at Monday Qualifiers behind the scenes. 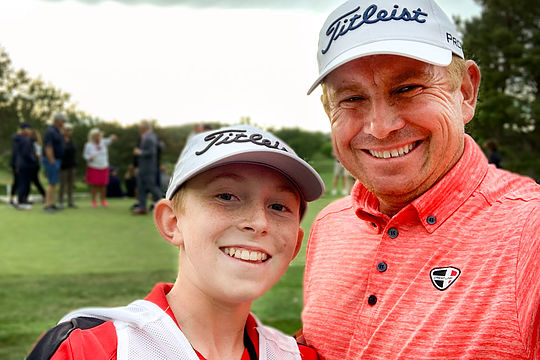 So it was with much relief that the Victorian finally nabbed one of only two US Open spots on offer at the Meadow Springs Country Club in Richland, Washington.

“I had a blast today, with my son Joey, caddying for me. And I holed a few putts at the end to qualify for the US Open!! Thanks to everyone for all of the texts and messages!! ⁦Torrey Pines here we come!,” tweeted Allan.

Allan fired rounds of 72 and 68 for a 4-under total to share second place alongside RJ Manke with Allan coming out on top following the playoff. Pepperdine University junior Joe Highsmith took medallist honours on 6-under.

This will be Allan’s fifth trip to a US Open since 1999 with his best finish a share of 28th place in 2005 at Pinehurst. His closest call with a PGA Tour victory came at the 2004 Reno–Tahoe Open when he lost in a four-way playoff to Vaughn Taylor.

At the other end of the age spectrum is 19-year-old Western Australian Karl Vilips. Vilips competed for one of six spots at The Bear’s Club in Florida but back to back rounds of 73 saw him finish 2-over with the cut coming at 2-under.

PGA Tour players Patrick Rodgers and Branden Grace were amongst those to make it through qualifying in Florida while former World No.1 Luke Donald was one of the bigger name casualties after closing at 5-over.

The biggest name to fall short was Rickie Fowler. The World No. 87 has been fighting a terrible run of form for most of this season and his woes continued after joining Padraig Harrington in missing the cut by a shot in Ohio.

The 2021 Masters marked the first major he had missed since the 2010 Open Championship.

A certain 50-year-old PGA Championship winner proposed an interesting idea about how to get Fowler into the tournament.

“I hereby designate my (no longer necessary) exemption to Rickie,” tweeted Mickelson after hearing the news.

It’s nice to have friends in high places but even the six-time US Open runner-up mightn’t have enough sway at the USGA to pull that one off.