She may be only 18-year-old but young Australian amateur Gabi Ruffels already has an asterisk beside her name.

While she first caught the eye of golf fans when she sealed the winning point for Victoria in the 2017 Interstate Series in Australia, she is fast making a name for herself in the US. 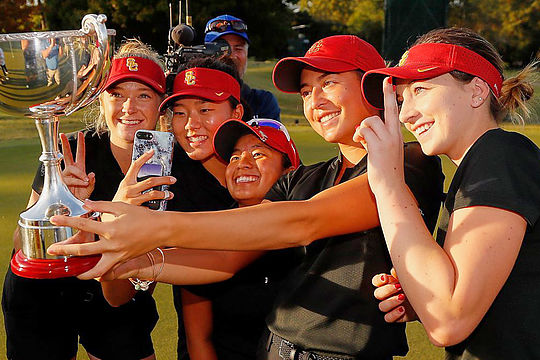 Ruffels, the younger sister of promising professional Ryan, has landed the winning point for her University of Southern California team in the East Lake Cup, one of US college golf’s prizes trophies as it features the four semi-finalists of the previous year’s coveted NCAA Championship.

Ruffels outlasted world No.7 ranked amateur Andrea Lee (Stanford) to give her Trojans team a 3-2 victory on the course where Tiger Woods won the recent Tour Championship on the US PGA Tour.

“I had a conversation with our men’s coach, Chris Zambri, and we’re big on (mental) wiring and how athletes deal with adversity,” said Silverstein said.

“I told him that I think Gabi is as good as I’ve ever seen at that and I want to put her at anchor. “

(So when it came down to that match)…I liked our chances.”