Young Melbourne amateur Cameron John now has something in common with American golfing heart-throb Rickie Fowler – they’ve both won at Gullane No. 1 in Scotland.

John shot a amateur course record 63 in the morning’s third round that helped him to a stunning four-shot victory in the Carrick Neill Scottish Open Stroke Play Championship to the east of Edinburgh. 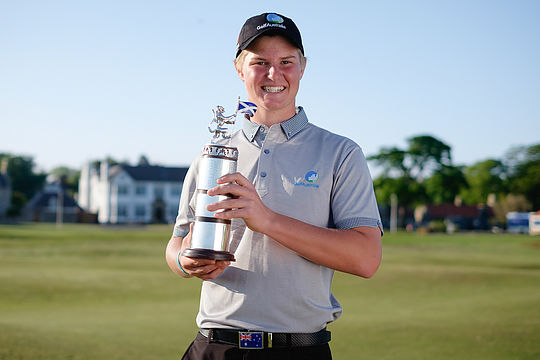 Competing in superb Scottish Spring weather the 17-year-old from Melbourne held off a strong Scottish challenge from Grant Forrest and Craig Howie and fast finishing Irishman Stuart Grehan to take the biggest title of his career, finishing with a final round 68 to post a 15-under par aggregate of 269.

John, the reigning Victorian Amateur champion, made his move this morning with a flawless eight-birdie haul to move into a two-shot lead ahead of overnight leader Forrest going into the final round, and held his nerve despite late bogeys on 14 and 15.

Playing links golf for the very first time this week, his knock-down approach shot from 97 yards to set up a birdie from two feet at the last, was played in his words, “like a true Scotsman”, to round off the championship in some style, which shades of Rickie Fowler’s final hole birdie in the Aberdeen Asset Management Scottish Open at Gullane nearly a year ago.

“I was joking with the people walking up the fairway with me that I must be born and bred in Scotland after hitting a shot like that as it was only about five feet off the ground from 97 yards,” admitted John as he savoured a second success on foreign soil just a few months after landing the Argentinean Amateur Championship.

John’s home club, Commonwealth, is located on Melbourne’s Sandbelt, but he reckoned it was his experience from playing on another course on that infamous stretch that helped get a trip taking in two more events in Britain then a handful more in America off to a flying start.

“The only place I’ve played like this before is Royal Melbourne, where you have to use the slopes with every shot,” he said, having carded eight birdies in a flawless morning effort to give himself a two-shot cushion heading into the final circuit.

The Golf Australia junior squad member watched Fowler’s Scottish Open success on TV from the other side of the world and described both the American’s achievement and his own as “awesome”.

The Australian was vying for the lead with Forrest (Craigielaw) for much of the final day, and with the East Lothian man getting off to a flying start in the afternoon with birdies on each of the first four holes, it looked like the local support was in for a thrilling finish.

But a costly double-bogey from a loose tee shot on the 7th hole damaged Forrest’s chances, as he eventually had to settle for a share of second place with Ireland’s Grehan, who produced an excellent final round 66.

Peebles’ Craig Howie, second in the Welsh Stroke Play last week, put himself into contention with a third round 65, matched by Drumoig’s Connor Syme as a clutch of Scots battled to become the first home player to take the title since Wallace Booth eight years ago.

Howie couldn’t quite keep up his morning momentum, posting a two-under 69 in the final round to clinch fourth place on 10-under, one clear of Syme, while joint overnight leader Sandy Scott (Nairn) signed off with a one-over 72 to share sixth place with English duo George Bloor and Adam Chapman.

“I’m certainly pretty happy with that performance. It was a lot of fun out there and easy to relax given I was playing with my club-mate Zach (Murray) so it felt like a normal day’s golf,” said the new champion, who had made the trip to Scotland with several of his Golf Australia colleagues.

“I won the Victorian Amateur and the Argentinian Amateur Championship in November, but this is my first time playing golf in the UK and the biggest event I have won.”

“Royal Melbourne is the only course back home which is like playing links, but I’ve loved the experience and it sets me up well for the next few weeks over here. Gullane is one of the best courses I have played and having watched the Tour pros play the Scottish Open last year on TV, its great to have come here and won.”

“Golf Australia’s support has been fantastic in giving us the opportunity to come over here and play and I’m looking forward to getting up to St Andrews to play the Links Trophy next week,” he added.