Rory Bourke, Matt Stieger and Brett Drewitt are within two strokes of the leader, Scotland’s Ross Bell, following the second round of the Scottish Open Stroke Play Championship being contested at Kilmarnock (Barassie) north of Troon.

Drewitt opened with a stellar round of 68 to lead the championship after the first day before firing a 73 to be in a share of third position at 6-under-par with Stieger and Bourke. 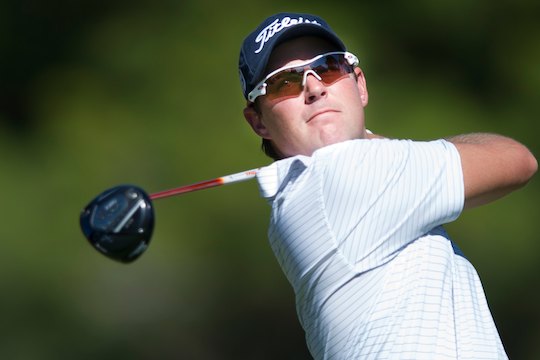 Bell is bidding to become the first Scottish player to lift the coveted national title since Wallace Booth , a member of the Scottish winning Eisenhower team, in 2008. Bell won last year’s Leven Gold Medal and was the 2010 Champion of Champions winner.

Stieger, the 2010 Australian Amateur champion, opened with rounds of 71-69, with Bourke firing rounds of 69-71. France’s Lionel Weber is in second position at 7-under-par, a stoke ahead of the Australians.

The Scottish Open Stroke Play championship is the first major international hit-out for the Australians this season with seven Aussies making the cut at even par.

Sinnott last season did not miss a cut in each international event he entered and it is pleasing to see the Victorian again in form early on tour.

Geoff Drakeford is at even par in a tie for 31st position with rounds of 77-69 with Jordan Zunic rounding off the Australian contingent playing the weekend, also currently at even par after rounds of 71-75.

It was a mixed bag of results for the Australians with some of our bigger named players struggling to fire.

This was a championship which slipped away from Higginbottom, Nisbet and Holman.

All have the talent and experience to perform well internationally and given their earlier commitments in Turkey the week leading into this championship, once settled in the UK you would expect the results to follow with the St Andrews Links and British Amateur forthcoming in the weeks ahead.

Of the remaining Australians to also miss the weekend, Luke Humphries finished at 6-over-par with rounds of 70-82, Daniel Bringolf came in at 7-over-par with Heath Riches and Callan O’Reilly.

Players will play thirty-six holes in Sunday’s final rounds in an effort to have their name next to former champions including Colin Montgomerie, Dean Robertson and Richard Ramsay.