A trio of Australian Professionals have set the early pace in New Caledonia to lead the South Pacific Open Championship being played at Tina Golf Course.

Queenslander Michael Wright, South Australian Jason Norris and Victorian Daniel Valente all fired opening rounds of 5-under 66 to lead after the first round. 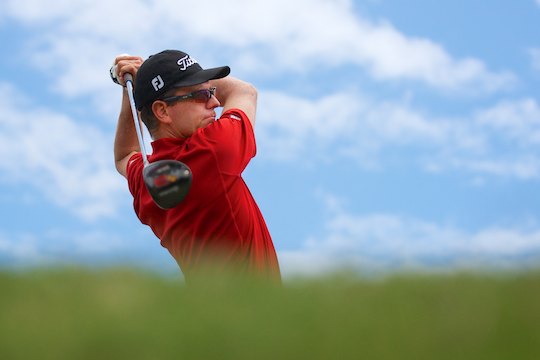 Bogey free Michael Wright cruised to the clubhouse lead early in the day.

“It was one of those days that was just very steady. Everything just seemed to fall into place, I didn’t do anything spectacular,” said the Queensland Professional.

Holding the course record of 9-under 62, Wright is a solid performer on the Noumea layout.

“I just feel really comfortable on the greens, I love this place it’s a really good spot to be,” added Wright.

“I think that is what it’s all about, being comfortable, if you are then you will play well.”

“It was disappointing last year to go that far and not win.”

“But now I have something to look forward to and see if I can go one better this year.”

Having a mixed day on course Jason Norris reeled off seven birdies and two bogeys to earn a share of the lead.

“I started really well and made a few birdies early but I struggled with my irons so I need to work on that,” said Norris who counts the South Pacific Open Championship as one of his favourite stops on the PGA Tour of Australasia.

“This is my favourite tournament of the year, it’s just a great place and the course is beautiful.”

“It offers a lot of birdie chances but also a lot of double bogey chances. If you play well, you will score well and if you’re not playing well you won’t.”

“In my opinion that is a good course.”

Playing in the afternoon field Victorian Professional Daniel Valente’s 5-under the card round was highlighted by an eagle on the par-5 13th hole.

“I didn’t hit the greatest drive, I hit it out to the right but I laid it up to the front edge and just pitched it in,” said Valente, who is yet to make a cut in two starts on the PGA Tour of Australasia this season.

“I haven’t been in this position before; it’s definitely nice to be up the top of the leaderboard.”

“I’ll keep trying to play as conservative as I can and hopefully chip a few more in.”