Wade Ormsby showed a fondness for links golf at its finest with a bogey free five-under par 67 on day one of the Dubai Duty Free Irish Open at Portstewart.

Ormsby ended the day sharing ninth place and just three shots behind the leading duo of American Daniel Im and Frenchman Benjamin Herbet, who shared a new course record with their 8-under efforts. 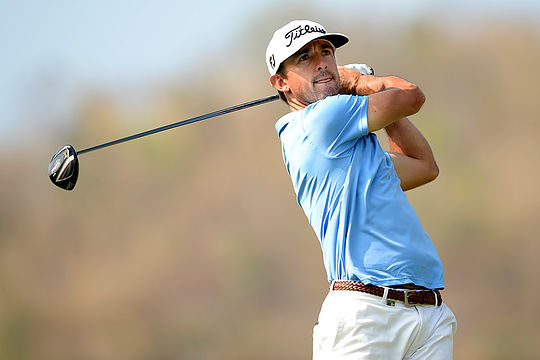 Ormsby, who commenced his round from the 10th, capped his round with three birdies in succession from his fourth hole and with both the 13th and 14th holes as they appear on the card being par 5s.

As well, Ormsby benefited from the benign conditions very late in the day after also having to handle a shower on day one of the $US 7m event.

“It was a good start and to not to drop a shot is very pleasing,” he said.

“I got off to a great start with birdies at my fourth, fifth and sixth holes and that was the key but then we also had to deal with some weather out there but fortunately it was only for a short time and I didn’t get beaten up.”

“When I first saw the course I thought it looked spectacular and especially down the first and for much of the first eight holes and it is as good a piece of land for a golf course that you will see anywhere in the world.”

“You just get a good feeling playing these style of golf courses.”

“I played Royal County Down when the Irish Open was held there two years ago so it has been good to now play Portstewart and maybe a fraction easier than County Down and a little more enjoyable.”

“And then it was also nice yesterday to play Royal Portrush and have a hit with my dad, and to play such a course as Portrush was pretty special”.

The now 37-year old Ormsby is returning to the European Tour since making his Major Championship debut last month at the US Open.

And while the affable Aussie missed the cut with a pair of 75s he has put himself in position to secure one of three places into the July 20th starting Open Championship at Royal Birkdale should he finish inside the top-10 and be among the leading three not already exempt.

“I headed straight to Munich after Erin Hills and while it was great to start with a 64, I just did not finish it off but the game is going in the right direction,” he said.

“I didn’t have a great week last week in France but I worked hard the last five days to try to get my game back to where I want it to be.”

“Of course, it was great to be at Erin Hills as everybody wants to be in the Majors but then no matter where you play you are always learning.”