Jordan Zunic has opened with rounds of 71-68 to be in second position at the St Andrews Links Trophy in Scotland.

Zunic is at 4-under-par with Daan Huizing from the Netherlands bolting to the outright lead to be in a commanding lead at 14-under-par through rounds of 65-64. 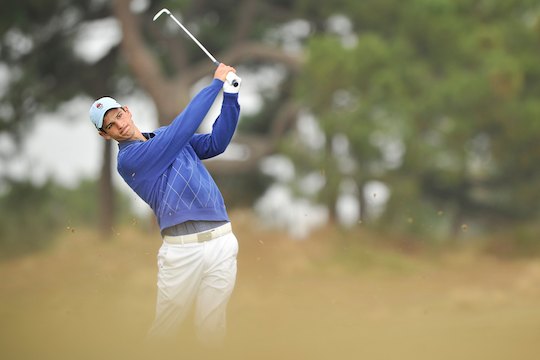 Huizing was runner-up in this event last year to England’s Tom Lewis and is the man in form after an eleven shot victory at the Lytham Trophy earlier this month.

The win followed on from the remarkable six victories the 20-year-old racked up last year in Europe.

Zunic will need to go low in Sunday’s 36-hole final around The Old Course at St Andrews to catch the Flying Dutchman.

“I’m striking the ball well and the courses are pure,” said Zunic.

“Hopefully, I can have two solid rounds on Sunday and make up the difference. It will be hard, but I will be giving it a go.”

Ben Campbell is the next best Australasian with the New Zealander at even par in a tie for 11th position with opening rounds of 72-71.

“Anything can happen with the 36-hole final round, but it will certainly take some effort to catch the leader as his margin is huge.”

Four other Australians made the plus-2 cut mark with Rory Bourke having another great international tournament following his runner-up finish last week at the Scottish Amateur Stroke championship.

Matthew Stieger is with Bourke at 1-over-par with rounds of 71-73, with the pair a stroke ahead of Daniel Nisbet and Cameron Smith after they finished right on the plus-2 cut mark.

A total of seventeen Australians entered the 144 man field, which included players from twenty-two countries.

Daniel Bringolf also finished at 3-over-par with rounds of 75-71.

Brett Drewitt fired rounds of 78-69 to finish at 4-over-par, with Todd Sinnott after he carded rounds of 74-73.

Nathan Holman missed another weekend finishing at 5-over-par, with the 2012 Master of the Amateurs champion’s woes compounded after opening with a 77 to then rebound nicely with a 71.

Callan O’Reilly finished along with Holman at 5-over-par with rounds of 76-72.