Aussies advance to semi-finals at US Amateur

Brady Watt and Oliver Goss will face each other in the semi-final of the US Amateur Championship being played at The Country Club in Brookline, Massachusetts.

Goss progressed to the semi-final with a solid 5&3 win over Brandon Matthews, while Watt defeated Scottie Scheffler with a 1-up victory. 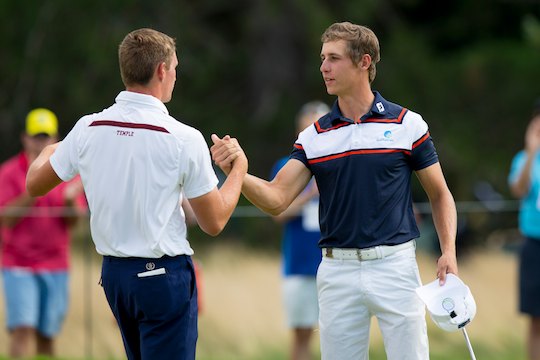 Oliver Goss, right, shakes hands with Brandon Matthews after their match ended during the quarterfinal round of match play at the 2013 US Amateur (Credit: USGA/John Mummert)

The pairing guarantees an Aussie in the final with the upper half of the draw seeing Canada’s Corey Conners against England’s Matt Fitzpatrick.

Goss is a sophomore at the University of Tennessee, where he is a kinesiology major. Last year Goss advanced to the quarterfinals of the US Amateur, falling to 2013 USA Walker Cup member Justin Thomas, 2 up.

Watt shared medallist honours with Neil Raymond at 6-under 134 and this is his first USGA championship.

Despite the recent track record, the close friends appreciate previous encounters means little and that tomorrow’s contest will be anything but a walkover.

“I will kind of just go with what Oliver [Goss] will do,” said Watt.

“If he is close, then I will have to go further and have to kind of feel it per shot. That will be all that I will focus on.”

During today’s matches Goss was striking the ball majestically and was in control at all times. He remains optimistic about his chances of winning this title despite meeting Watt in the semi-final.

“I definitely didn’t expect to win 5&3 today,” said Goss, who said his 12-foot par putt to halve the par-4 13th was a key point in his quarterfinal match.

“My first two matches were really tight. I think I played 53 out of 54 holes. But I’m glad I got the job done. We had hoped to be able to meet [Watt] on Sunday (for the championship) but it is what it is.”