Australia’s leading players have a strong chance of winning the Women’s US Amateur next month, according to Golf Australia’s High Performance Programme director.

Brad James believes with five of our girls ranked in the R&A world top twenty, the time is ripe for some Aussie success in the US. 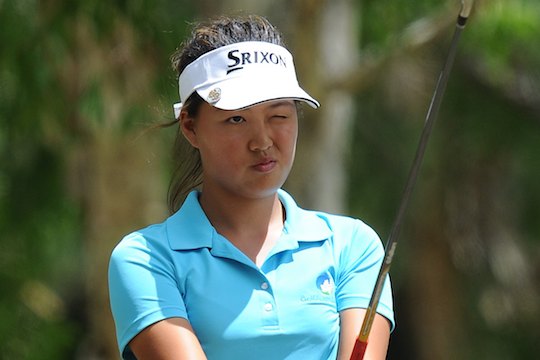 “It’s phenomenal to have five girls in the top twenty when you look at the numbers,” he said.

“So from that standpoint, I think we have a great chance but I think obviously you have to beat the Koreans, they are very solid.”

15-year-old Minjee Lee is currently ranked fourth in the world, one ahead of Victoria’s Breanna Elliott, while Whitney Hiller is fourteenth, Grace Lennon eighteenth and Su Oh twentieth.

The Women’s US Amateur starts with two rounds of qualifying at the Country Club in Cleveland, Ohio on August 6. The top 64 then compete in the match play section.

20-year-old Breanna Elliott is the Aussie most likely, according to James.

“Breanna has the experience,” he said.

“She played well last year at the US Amateur where she made the match play and lost in the first round but I think her game is probably two or three shots a round better than it was last year.

“I think expectations are very high for someone like Breanna.”

While Minjee is world ranked one higher than Breanna, James believes youth will count against her and so too 14-year-old, Su Oh.

“We are sending them over to the junior worlds to get that international experience as well but they are capable of playing well.”

Whitney Hillier is also playing with a lot of confidence following her fourth placing at the Queen Sirikit Cup in April. Her game has been solid all year and that has been reflected in her two outstanding victories at the Lake Macquarie Amateur in January and the Riversdale Cup in February.

Victoria’s Grace Lennon has also steadily improved her game with some solid performances this year, including a three shot win over Su Oh at March’s Victorian 72-hole stroke play championship.

James is expecting the girls to perform well and will be travelling with the team.

“I am just providing players with a support base and it makes the process a little bit easier,” he said.

“Some of the girls are only 15, 16 and 17 years of age so for some of them it is their first trip overseas so it is important that there is somewhere there to help them.

Otherwise they are overwhelmed by the process and don’t perform to their ability.”

James says the chance to pit their games against the world’s best is what our girls need to take the next step up in their development.

“In the past we have spent our resources on some of the smaller amateur events but the biggest doors can be opened by performing well or winning the US Amateur than any other event,” he said.

Victorian Elliot may be Australia’s best chance but Lydia Ko from across the Tasman is the world’s number one amateur and will prove tough to beat.

The Korean born Kiwi has plenty of experience and her breakthrough victory at the NSW Open earlier this year, where she beat seasoned professionals including Katherine Hull, Lindsey Wright and Laura Davies, shows she can handle the big time pressure.