The Australians won by 19 strokes to claim the Eisenhower Trophy for the first time since 1996. 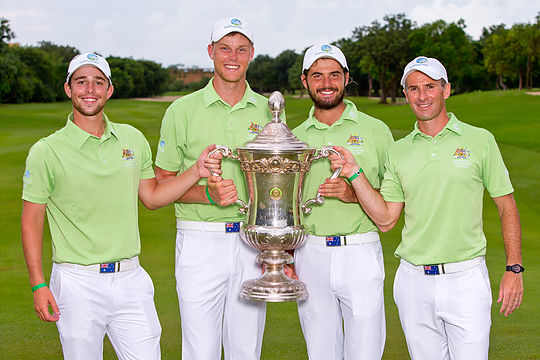 The Australians, who also won World Amateur Team titles in 1958 and 1966, posted a record score of 38-under-par, tying the total established by the USA in 2014. Their victory margin was the third-largest in championship history.

Davis also claimed top individual honours with a 17-under total.

“This is by far the best I have played in such a big tournament,” said Davis, who finished second in both the Asia-Pacific Amateur and Australian Amateur last year.

“It was just an honour to be in this tournament in the first place and representing my country, but to come away with a win is pretty special.”

His nearest rival was 20-year-old teammate Curtis Luck, the current US Amateur champion from Cottesloe Golf Club in Western Australia. Luck, who won the US Amateur last month, had scores of 69-71-63-68 to be 15-under.

England won the silver medal, behind a final-round 6-under. Austria and Ireland shared the bronze medal and were one stroke back.

The United States tied for sixth at 15-under. Oklahoma’s Brad Dalke led the Americans with a 70, Stanford’s Maverick McNealy shot 72, and Texas’ Scottie Scheffler had a 73.

The 2018 World Amateur Team Championship will be played 5-8 September at Carton House Golf Club in Maynooth, just outside Dublin, Ireland.