Aussies eager to get their hands on US Open silverware

A total of seven Aussies will line up tonight at Torrey Pines for the 121st US Open.

Among them Adam Scott, who will be playing the event for the 20th consecutive time, alongside the likes of Brad Kennedy, who at 46 will be competing in the tournament for the first time. 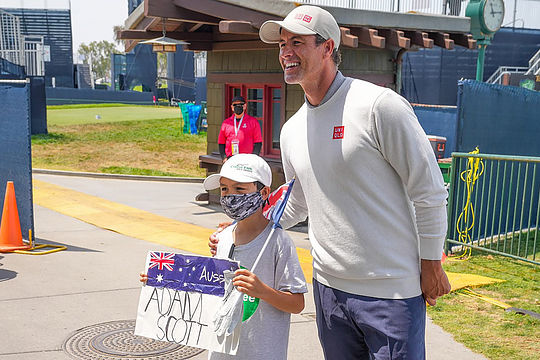 Adam Scott poses with a young Aussie fan ahead of the 2021 US Open (Credit: USGA)

Scott finished 7th just two years ago at Pebble Beach when Gary Woodland held off Brooks Koepka for the title. Scott’s best US Open effort remains a share of 4th place in 2015.

“I actually feel like coming off Memorial I did some nice work here in southern California on the game last week, so the confidence is up from where I finished at Memorial, which is a good thing,” said Scott, who sits at World No.43.

“Obviously the results have been few and far between, but I feel really good about where the ball-striking has kind of found itself, and that’s what’s been letting me down.”

Encouragingly, Scott’s best finish this season, a tie for 10th and his only top-10 so far this year, came at the Farmers Insurance Open in January at Torrey Pines.

Top ranked Australian Cameron Smith has a solid record at the US Open making four from five cuts but failing to make a mark on the weekend aside from a T4 in his first tilt in 2015.

“U.S. Opens are always a challenge. They always mix it up, which is nice. I think it’s going to be tough. The weather is going to be perfect so that’s probably going to be the only thing in our favour, I think.”

Only two Aussies have ever claimed a US Open win – Geoff Ogilvy (2006) and David Graham (1981) – but Smith thinks we are well overdue for another trophy.

“There’s probably four or five of us that are playing really good golf at the moment. Let’s hope for Australia that we can finally get one home,” said Smith.

Victoria’s Marc Leishman has been around long enough to know how hard it is to win a US Open title. He has made just five from 10 cuts, a share of 18th in 2016 remaining his only top-25 result.

“Confidence is good, but I’m never one to go into a U.S. Open overconfident by any means.”

When asked about the poor Aussie results at the recent US PGA Championship, Leishman wasn’t overly concerned about history repeating itself at Torrey Pines.

“I mean, it was a very different golf course, different conditions. I’m not worried about that one. You know, I think that’s probably the hardest major for Australians is the PGA, the way it’s normally set up. So yeah, definitely feel a little bit more optimistic about this week.”

Like Scott, Leishman has enjoyed some success at Torrey Pines. His most recent solo win came at the 2020 Farmers Insurance Open, which is played annually at Torrey Pines. The Victorian defeated now-World No.3 and this week’s tournament favourite, Jon Rahm.

Jason Day, our best performer at the US Open, will not be playing after opting to skip qualifying following his withdrawal with a back injury at the Memorial.