On a day when the USA bolted to the top of the leaderboard with a truly impressive score of 13-under-par, the Aussies were left well behind tied 34th at 3 over par 147.

The format of scoring in the Eisenhower Trophy is the two best scores from a three-man team and the Australians were unable to combine during the opening day of this four round championship. 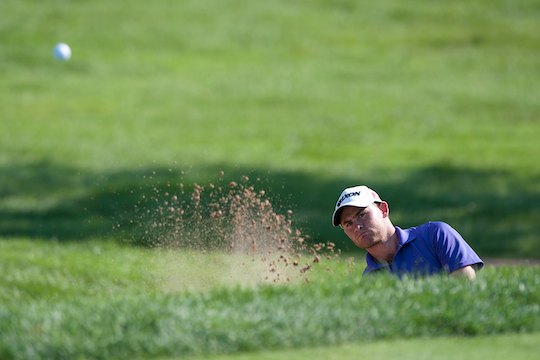 The team teed off at noon on the par 72 Cornelia Golf Club. Nisbet was first out followed by Cameron Smith and Matt Stieger. Scoring conditions were good with just half a club of wind and overall reasonable pin positions.

The best of the Aussies was Smith carding a 1-over par round that included four bogeys and three birdies. Certainly this is a creditable result from Smith with his individual result leaving him tied 64th in a field of over 200.

Stieger played consistent golf on the front nine hitting all the fairways and carding a bogey free 2 under and, even then, ruing a few close birdie misses.

A double bogey on the 14th, where he found water, compounded a disappointing back nine of 4 over to record 2 over for the day. After the round Stieger was typically ready to fight back after failing to build on his opening nine.

The story of Nisbet’s day was written in the first four holes where he recorded two doubles. After that he was square for the day and unable to reclaim the lost ground. After signing his card Nisbet was straight back down the 18th fairway to walk in with Smith and then Stieger.

Nisbet said, “I just got to go low tomorrow and post a score for the team.”

The team and captain Brad James gazed at the scoreboard adjacent to the 18th green in disbelief as they noted the countries on the leaderboard.

The mood on the trip back to the hotel was quiet and reflective. The players donned earphones and connected with their favourite tunes. The start of regrouping mentally for the next day.