American Patrick Rodgers closed with a 3-under-par 69 – his fourth consecutive round in the 60′s to earn him medallist honours at the Western Amateur, being played at The Alotian Club in Arkansas.

Rodgers, who toured Australia last January to play in the Australian Masters of the Amateurs at Royal Melbourne, set a qualifying record for the Tournament with an 18-under-par total. 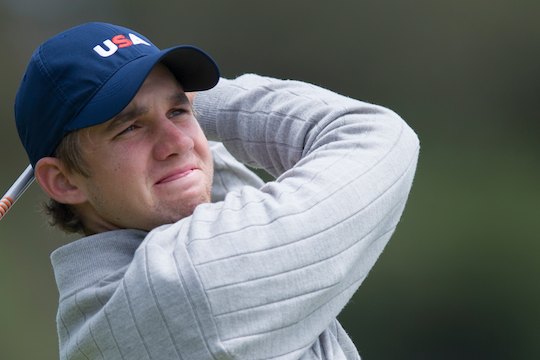 With the completion of the four round of stroke qualification, the field is now down to the final 16, who will begin the match-play portion of the gruelling championship.

No Australians qualified for the ‘sweet 16′ and just two, Brett Drewitt and Taylor MacDonald survived the opening two rounds.

The result is reflective of our current standing on the world amateur stage and shows how much work must be done by our players to make any impact in these international events.

Rodgers finished stroke play three shots ahead of Carlos Ortiz, a recent North Texas graduate who closed with a 67 for 15-under total. Like Rodgers, he posted four rounds in the 60s.

Next was Jordan Niebrugge, who had a 72 to get to 11-under. Sharing fourth at 9-under were Kramer Hickock after his closing 68, and 15-year-old David Snyder, one of the youngest players in the field.

For the Australians this tournament was a sobering reminder as to where many of our elite players currently stand on the main international amateur stage.

Most are now packing to head back home, while for a few the US Amateur awaits and the much needed time on the practice range will hopefully bring better results.