It was a win to savour and one which may well define the careers of some talented young Aussie amateur golfers.

They were part of the teams that pulled off a stunning Asia-Pacific double last weekend, scoring what could only be described as an ‘epic’ victory over Europe in Qatar. 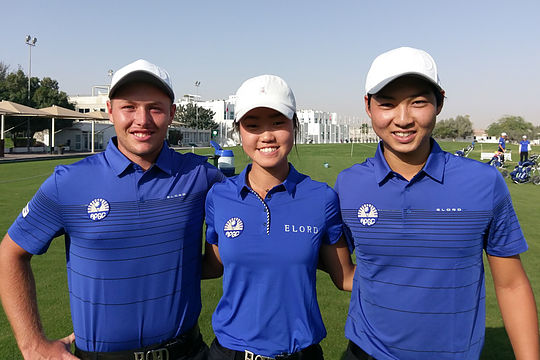 With the dominant women’s team already having won the Patsy Hankins Trophy even before the 12 singles matches, the men followed suit after an extraordinary day’s golf, coming from two points behind to win only when the event’s last putt missed.

The 16½-15½ Bonallack Trophy victory, sparked by Aussies Min Woo Lee and Shae Wools-Cobb in the lead-off slots for the singles, marked the first time the Asia-Pacific men had beaten Europe in the biennial matches since 2004 in Italy.

The women prevailed 23½-8½ with rising Thai star Atthaya Thitikul and her foursomes and fourball teammate Yuka Saso both winning all five points available to them.

Sydney’s Grace Kim pushed hard all day in her singles match against Dutchwoman Zhen Bontan, eventually falling one-down, but not before another great experience in winning two of the three points she contested during the week.

“I had an amazing week, we bonded really well,” Kim said. “I learned a lot and have a lot to take home.”

But the big drama on day three was in the men’s division with the Europeans starting the singles with a two-point buffer.

It wasn’t long before Lee and Wools-Cobb had the Asia-Pacific men back on equal footing, winning 3&1 over Ireland’s Robin Dawson and 1-up over France’s Edgar Catherine, respectively.

Yet the Europeans wouldn’t surrender.

First they clawed back their two-point lead, only to see Asia-Pacific hit the front again when Kiwi Daniel Hillier capped a winning mid-order run by Kammalas Namuangruk, of Thailand, and Korea’s Dong Min Kim.

Three matches later, Sweden’s Oliver Gillberg followed a win by Norway’s Kristofer Reitan to give Europe back the lead with two matches left on course.

In the anchor match, Lloyd Jefferson Go, of the Philippines, ensured the worst his team would do was an overall half when he toppled France’s Frederic Lacroix 3&2 to leave the second-last pairing to determine the final result after Japan’s Kazuya Osawa walked off the 17th 1-up.

Kazuya had a 10-foot putt on the last to seal the result, but agonised as it missed knowing an overall half would mean the trophy stayed with defending champion Europe.

But when Englishman’s Matthew Jordan eight-footer slipped narrowly by, the resultant 1-up win gave Asia-Pacific the thrilling last point required.

“It was amazing to come out on top, a really fun week,” said Perth’s Lee, who won three of his five matches.