The Aussie team duo of Scott Hend and Sam Brazel could feel proud having finished runner-up in the inaugural European Tour Golf Sixes at the St. Albion club in England.

Hend and Brazel were beaten 3&1 over the six-hole final by the Danish duo of Thornbjorn Olesen and his teammate Lucas Bjerregaard and after the Aussie duo conceded the closing hole when Brazel, winner of the UBS Hong Kong Open, missed a putt that may have sent the match into an extra hole. 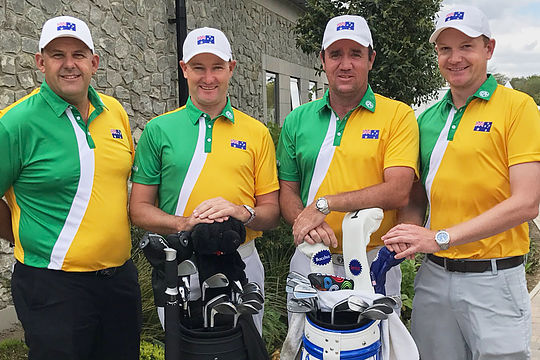 “A tad disappointing but Denmark played well and putted the last few holes a little better than us and they deserved the win,” said Hend.

“It’s a great week for everybody. The kids are fantastic. It’s great to see so many kids kicking around, sliding down the hills and having fun on the golf course. That’s what it’s all about.”

Brazel added: “It was awesome to be part of it. Centurion put a great event on. To the members, the guests, the fans, it’s been fantastic.”

A birdie on the third gave Australia a 1-0 lead in the final but Denmark then won the final three holes to make golfing history.

Hend and Bjerregaard hit huge drives down the third but Olesen went long with the Danes’ second while Hend was left with 18 feet for an eagle. The two-time European Tour winner got down in two and with Denmark failing to get up and down, Australia led 1-0.

The scores were soon level again, though, as both Hend and Brazel put their tee-shots in the water on the fourth to record a bogey, with Denmark winning the hole in par.

A swift turnaround in fortunes was completed on the fifth as Bjerregaard put his tee-shot to four feet and Olesen finished the job to send Denmark up the last with a 2-1 lead.

Olesen was inches from putting Denmark’s second shot in the water on the sixth but an excellent recovery from Bjerregaard meant the Danes would have two putts for the win and Australia offered handshakes on the final green.

There was drama in the third/fourth place play-off as Scotland won a nearest the pin contest on the play-off hole to beat Italy 2-1.

A birdie on the second edged Matteo Manassero and Renato Paratore ahead but it was 1-1 when Marc Warren and Richie Ramsay birdied the fifth and the teams could not be separated with pars on the sixth and the play-off hole.

That set up the dramatic finish and Warren put his tee-shot to seven feet and three inches, with Manassero finishing just four inches further away.