Starting the day the ALPG Team needed just 2 points from the 4 foursomes matches to clinch third place, and Katherine Kirk and Stacey Peters made the perfect start taking a 3up lead through 5 holes before the LET team of Carly Booth and Frenchwoman Gwladys Nocera fought back winning the 6th, 9th, and 10th holes to square the match. 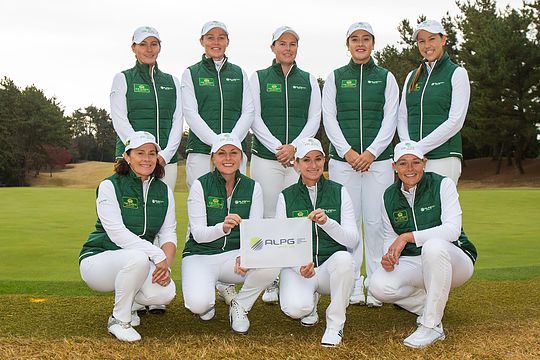 The momentum swayed back into the hands of the Australians after a birdie at 12, and after Nocera missed from 2 metres for par at the 14th the Australian pair were 2 up with 4 holes to play.

Sarah Kemp and Sarah-Jane Smith looked to have their hands full in the final match, taking on the powerful LET pairing of Felicity Johnson and Holly Clyburn. However the British pair failed to fire and good friends Smith and Kemp were always in complete control, taking the match 5/4 and sealing the crucial first point for Team ALPG on the 14th green.

In the third match out Captain Karrie Webb and Rachel Hetherington were hoping to roll back the clocks today playing against Englishwoman Florentyna Parker and South African Lee-Anne Pace, however the pair could not get into a rhythm after losing the first 2 holes and went on to lose the match 5&4.

Meanwhile Kirk and Peters halved both the 15th and 16th holes, and by the time the rest of Team ALPG reached the green to cheer on their teammates Kirk had hit a fantastic approach to the 17th green and the pair were able to close the match out to claim the second point which clinched third place for Team ALPG.

In the second match out the West Australian pairing of Hannah Green and Whitney Hillier were looking in trouble when they were 2 down through 11 holes to the LET team of Iceland’s Olafia Kristinsdottir and Englishwoman Annabel Dimmock. However, a birdie at the par 5 12th hole from the Australian pair halved the margin to one, and when Dimmock missed a short par putt for a half on the 15th the match was all square.

The pair halved the 16th hole, and when Green hit a superb approach shot on the 17th hole with the LET team in the fairway bunker, the advantage seemed to lie with Team ALPG. However, Kristinsdottir’s reply from the sand was exquisite, nestling just a metre from the flag.

Green, coming off an outstanding rookie season both on the ALPG and Symetra Tours stood up and confidently holed for birdie from 5 metres, which was match by Dimmock seconds later leaving the match all square heading to the 18th tee.

Both Hillier and Kristinsdottir found the fairway impressively, and Green’s brave approach across the water finished no more than 2 metres away. Dymock’s reply was not as impressive, leaving her partner a lightning-fast downhill six-metre birdie putt which Kristinsdottir would miss leaving Hillier with the stage to herself and a putt for victory.

The 27-year-old, who had celebrated her birthday on Friday pulled the putt left of the hole to leave the match halved and ensure the ALPG Team an outright victory and third place in the tournament.

ALPG Team Captain Karrie Webb was delighted with her teams performance today, “At the moment we are pretty chuffed to have won today, but also disappointed not to have made the final having been so close yesterday.”

“This week has been a great week and the girls played really well. We all support each other every week during the year but are playing on different schedules and don’t get to catch up as a group often, and we had a lot of fun together.”

In the Championship Final the team from the LPGA of Japan stunned red hot favourites the Korean LPGA to win by 3½ to ½.