Given the lost playing time during the first three tournament days the decision to reduce the Tournament came as no surprise to the players.

The field was split into two with the bottom half consigned to Cornelia Golf Club with the top 36 playing the final day at the par 71 Antalya Golf Club. 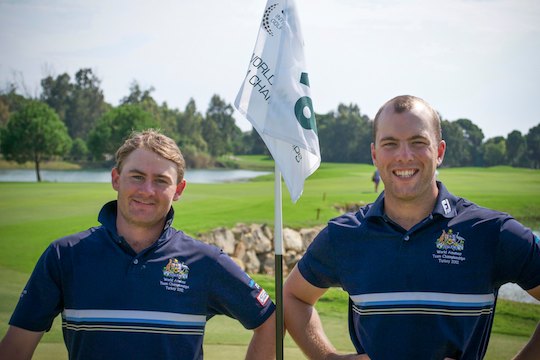 (L-R) Matt Stieger and Daniel Nisbet sign off on their amateur careers at the World Amateur Championship in Turkey (Photo: Trefor Clayton)

The Aussies ranked 22nd after the second round in essence made this “cut”.

The top 18 teams started their third and final round late Saturday afternoon. This was because of concerns as to potential weather disruptions on Sunday.

The Aussies got underway at 9am on Sunday determined to climb up the leaderboard.

The three Aussies came home each with identical scores of three under. The tidiest score card coming from Daniel Nisbet with a bogey free round of 68 after earlier rounds of 8-over and 4-over.

Matt Stieger finished with a combined even par total to finish in a tie for 39th position.

Cameron Smith was the best of the Aussies for the tournament finishing with a combined 5-under-par total and a tie for 31st position in the individual rankings.

The combined score of 6 under (the two best scores counting) was enough to lift the Aussies into 15th slot on the team leaderboard.

The Australian score for the three rounds of 5 under was five shots off a top ten finish and a distant 19 shots from the record winning score from the USA of 24-under.

At least the Aussies overhauled their trans-Tasman neighbours who finished in 24th spot with an even par total.

Nisbet had his best round of the tournament on the final day playing regulation golf with his trademark aggressive hitting.

He carded 1-under for the front nine making birdie at the short par 5, 7th. He certainly found his missing tempo. His form continued for the back nine for a blemish free 3-under.

Stieger was 4-under through 8 with a trifecta of birdies on 5, 6 and 7. Typically finding fairways and the flat stick finishing the good approach shots.

He had a near hole-in-one the par 3, 6th set up to 205m. The ball lipped out to 30cm after hitting the pin, which was not seated in the hole correctly.

His front nine came undone on the 9th. Short from the rough he flubbed the chip shot then three putted for a double. That ball was swiftly jettisoned to a nearby lake taking with it some angst. He maintained his composure. Despite carding another double his 7 birdies in the round enabled him to finish 3 under and even par for his 54 holes.

Smith was the best of the Aussies for the tournament finishing with a combined 5-under-par total and a tie for 31st position in the individual rankings.

Team captain Brad James said, “The last round reflected our ability, the first round was uncharacteristic. We were just unable to make up any more ground over 54 holes.”

Given the first round performance he was happy with the 15th position.

Would he have done anything differently? James, “No, I think we got it right.”

Asked on individual performances he was of course delighted with Smith’s effort and his tactics on course.

For Stieger he noted the far better way he handled disappointments on course and mentioned his recovery from the double on nine today.

James, whilst acknowledging Nisbet’s result today, was looking for him to improve club selection. That’s probably code for care with the driver.

The conclusion of the Eisenhower Trophy marks the end of both Nesbet’s and Stieger’s successful amateur careers. Nisbet tees up this month in Tour School attempting to qualify for a US PGA card. For Stieger he kicks off his professional career at the WA PGA in Kalgoorlie.