Pymble Golf Club played host to the Australian Deaf Golf Team last Sunday in a ‘friendly’ match against their Major Pennant Team as part of the Aussie team’s preparation for next month’s World Deaf Golf Championships to be played in Michigan, USA.

Jack McLeod, Jack Besley, Luke Ellis, Mark Aird, Andrew Honeysett and Craig Douglas are members of the Australian Deaf Golf team that heads to the USA next month as the defending champions. 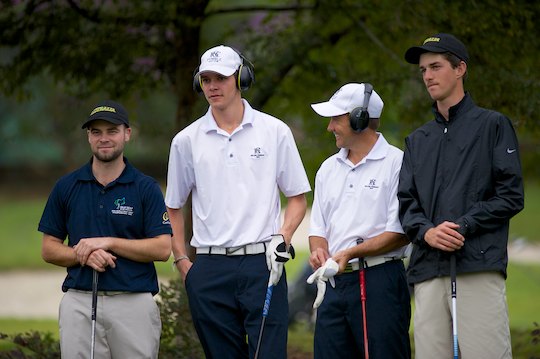 Jack McLeod, who plays off +2, is the current Australian and World Deaf Golf Champion, a title he will be defending in July, and he was eager for his team to test their game against one of the strongest Pennant Teams in Sydney on their home course.

After the first nine holes, the Pymble players had the added challenge of wearing ear muffs to help comprehend the difficulty the deaf players have when they play.

The top-order match between Wall and McLeod went to the wire with McLeod making a birdie on the 18th to win 1-up. It was a rare loss on home soil for Guy who intends to test his game on the seniors tour in coming months.

In the number 2 match between Pymble’s junior champion Waddington and Besley saw Waddington securing the win after holing a bunker shot on 16th.

Joe Darcy and Andrew Honeysett was one of the hardest fought matches in the series, with Darcy’s local knowledge seeing him through to give Pymple their second win.

The fourth order match was between two Pymble members, Corey Jones and Australian Deaf Captain Luke Ellis and saw the win to Corey who is a young up and coming star for Pymble.

Golf is a hard enough game to master with full hearing and as Pymple’s number 5, Jono Streichler, had to don the earmuffs he was travelling well against Craig Douglas. After a few holes adjusting to the silence, Streichler was able to gain the win.

The last order match between Scott Matheson and Mark Aird saw Scott come out the winner to deliver a solid victory for the home club with five matches falling Pymple’s way.

The 10th World Deaf Golf Championship starts 12 July at The Bear and The Wolverine Grand Traverse Resort with 111 entries from 14 countries currently competing in both individual and team events.

The Australian Mens Team are also the 2012 WDGC Team champions.