Aussies still in the hunt at Augusta

Brandt Snedeker and Angel Cabrera may share the lead at 7-under par following the third round of the Masters in Augusta but the Aussies are hot on their tales with Adam Scott a stroke behind at 6-under and both Jason Day and Marc Leishman two strokes further behind the leaders. 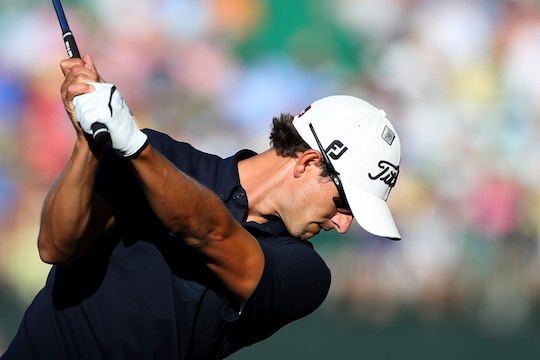 Adam Scott leads the Australians after the third round of the 2013 US Masters (Credit: Matt Harris)

He is likely to be paired with Day in tomorrow’s second last group, reminiscent of their 2011 final day when both Day and Scott played into contention only to be pipped by a fast finishing Charl Schwartzel.

“A few of my drivers finished just a couple of yards in the rough, which made it a little tricky to attack the pins,” said Scott who is in his 12th Masters appearance.

“It also kept me cautious, so I plodded my way around and that was not a bad way to play today. Obviously to win the Masters would be incredible.”

An Australian has never won at the Masters although we have had numerous runner-up finishes, the last in 2011 with both Day and Scott and also in 1996 when Greg Norman entered the final round with a six shot lead only to implode shooting a 78 to Nick Faldo’s 67 to give Faldo his third green jacket.

Scott says his game is where he wants it to be in these bigger events and knows he needs to produce something special tomorrow to win his first major.

“A couple of years ago here I felt that I did every that I could, but it wasn’t enough and that’s how it goes sometimes,” said Scott.

“It is going to take a great round tomorrow as there are too many great players in it. I am going to need to have a career round to win and that is what these events do, it takes a career round that makes them a champion.”

With the added attention placed on the Aussies with the number of near misses Australians have had at the Masters, Scott was remaining coy regarding the chances of breaking the winless Aussie drought.

“It would be great for Australia and we have never looked better, odds wise, going into a Sunday probably other than in 1996,” said Scott referring to Greg Norman’s effort at Augusta.

“It is incredible that three out of four of us are right in there and it will be a hell of a round tomorrow.”

Day, who led the field by one overnight, looked set to join Snedeker and Cabrera in a three-way tie, but missed short putts at the last two holes to slip back to 5-under.

The missed putt on 17 from three feet stopping Day’s momentum and damaging what was otherwise a solid round.

John Senden, the fourth Aussie in the field, is currently in a tie for 23rd position at 1-over.

World number two Rory McIlroy, the winner of the previous major at the PGA Championship in August, shot himself out of the tournament with a 79 that included a triple bogey at the 11th and a double at the 15th to stand at five over.

China’s Guan Tianlang, the youngest player in Masters history, struggled to a five-over par 77 to stand next to last.