Austin has been a part-time player on the Tour this season, missing the cut in all three events he’s played, but quipped “Now I’ve got a job again.” after claiming his fourth Tour title and first since 2007. 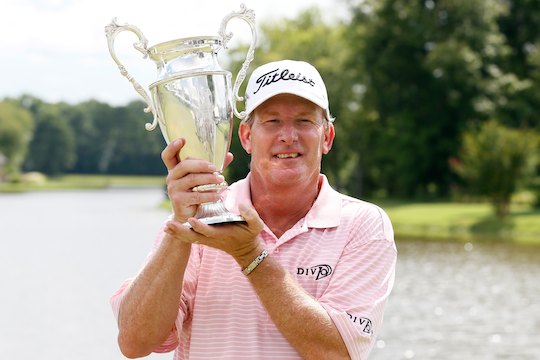 Austin caught fire on Saturday, shooting a combined 11 under while completing his second round and then firing a 5-under 67 third round in the storm-plagued event.

In the playoff, Austin reached the par-five 18th in two shots and two-putted from 85 feet, rolling in an 8-footer for birdie. Summerhays’ second shot of the playoff found water and Beckman missed a 6-foot birdie try after Austin’s make.

“Congrats to Woody,” said Summerhays, 29, who came up just short while playing in the final group for the second straight Sunday.

“That was an amazing putt he made. You gotta be kidding me. Forty-nine years old and kicking all of our butts. Hats off to him.”

The tournament played opposite The Open Championship provided important opportunities for a number of players, including many Australians who have been playing in anonymity on the Web.Com Tour so far this year.

Veteran Peter Lonard made his first start on Tour in 2013 count by shooting 13-under par, tied in 17th place alongside Stuart Appleby and Steven Bowditch as the best placed Australians.