Englishman Andrew Sullivan may have been too strong over a stellar international field in winning the Scottish Open Amateur at Lansdoene, yet the Australasian contingent opened their first UK tournament campaign strongly.

Sullivan produced a spectacular birdie-eagle-birdie finish to win the title at 6-under-par for a stroke win over fellow countryman, Steven Brown. 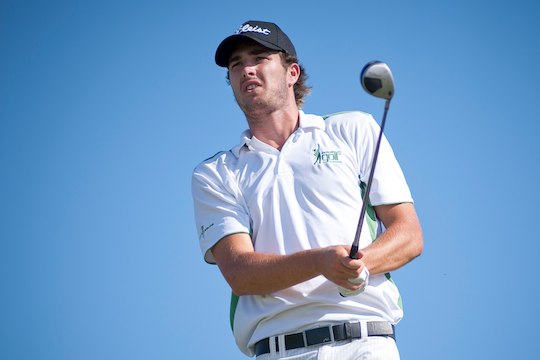 The Englishman fired rounds of 65-71-77-69 to record his third win for 2011 after the world number 4 secured the New South Wales Medal back in March and the Hampshire Salver at North Hants Golf Club in England a month after.

Sullivan, who held the lead after both the first and second rounds, again proved his worth in a main amateur tournament has he powered home when others faulted with scores well into the 70′s in norm.

Sullivan’s 3-under-par final round was the day’s lowest to secure victory.

“That’s definitely my best finish to a round in those circumstances, said an elated Sullivan, who recently finished 6th in the Welsh Stroke Play and 8th in the Lytham Trophy.

“I struggled a bit, after a good start but saw I was still in contention going into the back nine and said to myself just to keep it going. I saw Steven [Brown] had moved up to five-under, so knew I had to go for it and managed to pull it off.”

Daniel Nisbet failed to capitalise on opening rounds of 69-68 in his first tournament since receiving an 18-month ban for importing steroids and faded with rounds of 77-75 to finish in a tie for 5th position at 1-over-par.

New Zealander Daniel Pearce also had a strong tournament finishing a stroke behind Nisbet in a tie for 7th along with Englishman and 2011 New South Wales Amateur Champion, Jack Senior.

Matt Stieger, the reigning Australian Amateur champion, carded rounds of 71-72-80-76 to finish in a tie for 28th with another New Zealander, Landyn Edwards, four better in a tie for 24th position.

This week the Australasians move to the home of golf, St Andrews, for the St Andrews Links Trophy where Brett Drewitt, Ryan McCarthy and Kalem Richardson will compete with their Aussie mates in their first UK event of the 2011 northern hemisphere season.

The 40 lowest scores and ties over the 36 holes will qualify for the final 36 holes to be played over the Old Course on Sunday 5 June 2011.