Australia has won the inaugural Four Nations Cup by 11 shots in fine and warm conditions at The Hills Golf Club near Arrowtown on New Zealand’s south island.

The Australians held a 14 shot lead heading into the final round courtesy of superb third rounds from Brett Drewitt (65) and Todd Sinnott (66). 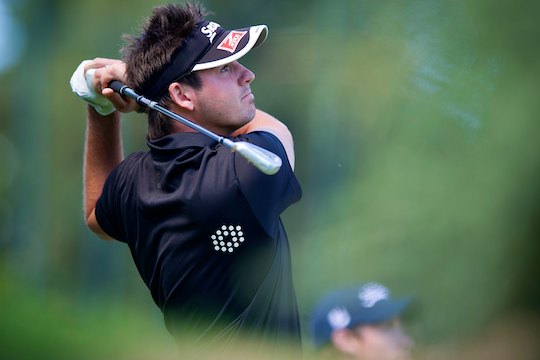 At one stage the Kiwis closed to within three shots as the action heated up on the final day.

National Squad member Brett Drewitt had an impressive weekend, leading the team to a fine victory.

Drewitt’s final round 4-under par 68 ensured that Australia would add the Four Nations Cup to sit alongside the Trans Tasman Cup, Nomura Cup and Southern Cross Cup.

His final round score proved to be the difference as he combined with Sinnott (72) and Ryan Peake (70) for a six under par total to secure what in the end was a comfortable win.

“It was good to be able to back up that 65 from yesterday and to play that good around Sir Michael Hill’s course was just amazing,” said Drewitt, who finished as the leading individual on an eight under par, winning by six shots from New Zealand’s Campbell and compatriot Sinnott.

Drewitt was scoreboard watching throughout the final round and knew the Kiwis were making a charge.

“I was aware of it but I just tried to play my own game. I had confidence in the boys who have been playing good this week. I was just trying to do what I do and I was pleased to get it done.”

Australian team coach Craig Bishop was proud of his boys as they delivered under pressure.

“It got a bit tight out there and it was touch and go for a while but I feel the boys stepped up and did exactly what they needed to do to win. It was a fantastic week. We had all the weather and then today was just perfect.”

Argentina finished the final round with an even par total to overtake South Africa (+5) into third place by four shots.

The four international teams (New Zealand, Australia, South Africa and Argentina) are made up of four male players with the best three scores counting each day. One round of golf was played each day for four days.