The Australian Junior Championships get underway tomorrow in Tasmania with 156 of the countries best male juniors competing at Ulverstone Golf Club and 77 ladies hitting the fairways at Devonport Golf Club.

Cameron John (pictured) starts one of the favourites in the Boys Championship but will have his work cut out with Western Australia’s Min Woo Lee, Jason Hong and Issac Noh from NSW and Joshua Armstrong from the ACT all capable of winning the title. 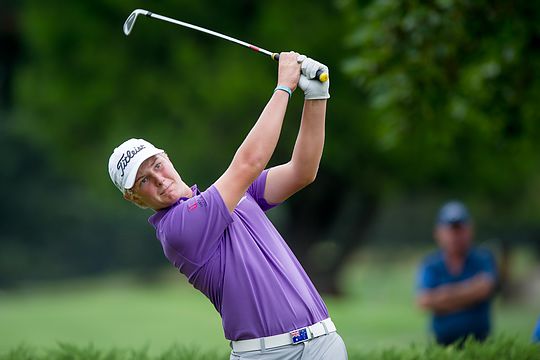 John is coming off top-5 finishes at the Australian Masters of the Amateurs and the Lake Macquarie Amateur and won an impressive eight junior titles during 2015, including Victorian Boys, Asia-Pacific Junior and the Victorian Amateur.

He certainly has the game and experience to dominate this impressive junior field.

Armstrong is off a solid finish at the Riversdale Cup and is a player moving nicely through the junior ranks. Min Woo Lee is another exciting talent and recently won the Redlands Junior Masters and finished runner-up at the Western Australian Amateur medal.

Min Woo Lee is the highest ranked word amateur competing this week with an R&A ranking of 150.

Lee was also a prolific winner during 2015 with four titles to his credit including the Western Australian Amateur and the Royal Fremantle Open.

Ulverstone is a strategic layout where errant shots are swallowed quickly by the majestic Aussie bush which defines this great course. With greens running true and fast and the fairways firm and unforgiving, this layout will certainly test the field over the next three days.

New Zealand’s Daniel Hiller is the lowest player on handicap competing. The +3.6 marker finished 3rd in this event last year and enters the championship with a top-10 at the New Zealand Stroke championship having all secured this year top-25 finishes at the Australian Masters of the Amateurs and at Lake Macquarie.

Celina Yuan has returned to defend her title which she won in nail bitting fashion last year in Adelaide with a birdie on the third extra hole to defeat Queensland’s Karis Davidson.

It was Davidson’s second consecutive year she has finished runner-up in the event and she has returned again this year aiming to go one better.

Doey Choi, Grace Kim and Kathry Norris all should challenge, as could Stefanie Hall. Yet the form Yuan brings into this championship certainly sees her as the hot favourite.

The first Australian Boys’ Amateur Championship was played in 1982 over 54-holes stroke play for players under 21 years of age. Past winners include Adam Scott, Jason Day, Stuart Appleby, Robert Allenby, with Ryan Ruffels the most recent two-time champion in 2014-5 before moving to the professional ranks.