Australia’s Cameron Davis teed off on Sunday six strokes off the pace but a superb final round of 7-under 65 at the Nashville Golf Open saw the 2017 Australian Open champion claim a life-changing one-shot victory over a trio of Americans including overnight leader, Lanto Griffin.

The 23-year-old from Sydney began the day slowly with six straight pars before turning up the heat with back-to-back birdies at the 7th and 8th holes.

However, it was on the back nine where the real fireworks began with the first of five birdies dropping at the par 4, 11th hole. He went on to claw back another four strokes at the 13th, 15th, 17th and 18th holes to enter the clubhouse at 18-under.

The New South Welshman now moves to 14th place on the Web.com Tour moneylist with close to US$130,000. The top 25 on the moneylist at the end of the season will secure their PGA Tour card for the 2018-2019 season.

“I kept on holing putts even when the pressure was on, which is a big improvement for me,” said Davis.

“It’s nice that I could get it done under pressure. There were nerves out there, I didn’t know the exact situation, but I knew I was up there and to make a few putts is really nice.” 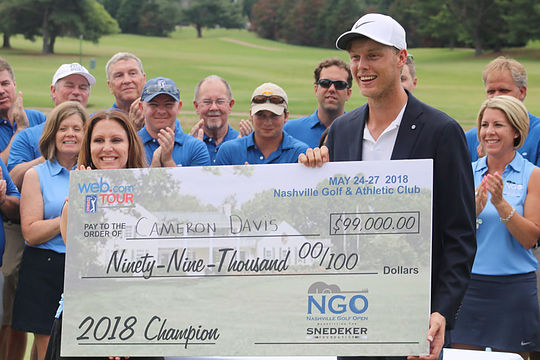 “I drove the ball great, putted really solid under pressure. I’ve always felt a little nervous, and I feel that negatively impacted my putting, so to have a stretch of nine holes where I knew I was in contention, but I kept holing putts, was a really good boost for the momentum now.”

Davis’ previous best finish this season came at the Knoxville Open where he finished T4 before missing the third round cut at last week’s BMW Charity Pro-Am.

Davis’ win offers plenty of opportunities but perhaps none greater at this stage of his career than to play at the Memorial Tournament this week on the PGA Tour where Davis will get to compete alongside some of the biggest names in world golf including fellow Aussies Jason Day and Marc Leishman as well as Tiger Woods, Jordan Spieth, Justin Thomas and Rory McIlroy.

Brett Drewitt was the next best of the Aussies finishing T30 at 9-under alongside Curtis Luck with Rhein Gibson another shot back in equal 42nd place.

Jamie Arnold couldn’t recover from his opening round 75 and missed the weekend cut.