Following a year on the sidelines, the Men’s and Women’s Australian Opens are set to make an historic return to our golfing calendars later this year.

For the first time ever, the prestigious tournament will be played at the same time and venue with the Victoria Golf Club and Kingston Heath taking on tournament duties from December 1-4. 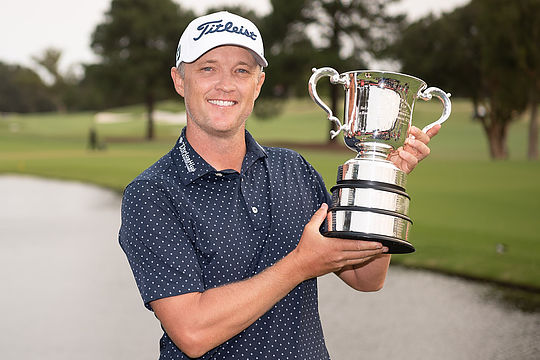 Matt Jones won the Australian Open when it was last played in 2019 (Credit: Anthony Powter)

The men’s event will also join the Australian PGA Championship, played the week prior at Royal Queensland, as a DP World Tour co-sanctioned tournament giving local players another chance to earn an instant promotion on to one of the world’s biggest stages.

Fields of 144 men and 144 women will split the $3.4 million prizemoney on offer but will compete for seperate trophies. Both Victoria Golf Club and Kingston Heath will host play on the first two days before moving to Victoria Golf Club for the final two rounds.

“This truly is a coup for Australian golf – it presents a great opportunity for the game and will take the two Open championships to another level,” said Golf Australia’s CEO James Sutherland.

“The men are still playing for their own Australian Open title for the Stonehaven Cup, and the women for the Patricia Bridges Bowl. Both trophies have been won by some of the best golfers to play the game.”

“We’ve seen the success of the Vic Open in this [mixed] format, and more recently the Webex Players Series where men and women play for the same title.”

The Men’s Australian Open will be returning to Melbourne, and the Victoria Golf Club, for the first time since 2002 when Stephen Allan won the Stonehaven Cup by a shot over Aaron Baddeley, Rich Beem and Craig Parry.