In a pressure-packed final round that was a see-saw battle until the veryend, 2017 PNGA Player of the Year Cole Madey held off a fierce challenge from Australia’s Nathan Barbieri to claim the title in the 24th Sahalee Players Championship, held this week at Sahalee Country Club in Sammamish, Wash.

Madey began the day with a one-shot lead over Barbieri, and the two were paired in the final group of today’s final round of the 72-hole championship. 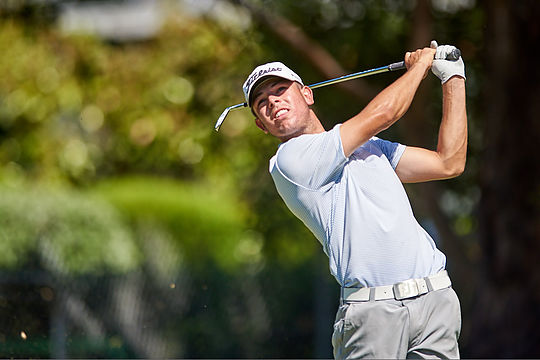 After sliding back on the front nine, Barbieri inserted himself back into contention by dropping a 45-foot eagle putt on the par-5 11th hole, which put him within two of Madey.

Barbieri eventually took the lead for the first time on the par-4 14th when he birdied from eight feet while Madey bogeyed. Madey tied it on the next hole, then took the lead again on the 16th hole.

Barbieri, who hails from North Ryde in Sydney, then tied the championship with a dramatic 22-foot downhill birdie putt on the par-3 17th.

On the final hole, both hit strong drives of nearly 300 yards on the uphill, 535-yard par-5 18th. But Madey closed the deal with a stunning 245-yard 4-iron to within 12 feet, while Barbieri’s approach caught one of the towering trees that line Sahalee Country Club and fell short of the green.

Madey narrowly missed the eagle putt but clinched the victory with a tap-in birdie when Barbieri missed his 15-footer for birdie. Madey and Barbieri would both close with an even-par 72.

The 2017 Oregon Amateur champion and UCLA standout led the elite invitational championship, featuring some of the top college and junior amateur players from around the world, from wire to wire, finishing with a four-day total of seven-under-par 281. Madey had finished tied for ninth in last year’s Sahalee Players Championship.

“This is huge for me,” Madey said afterward. “I’ve put so much work into my game, so many hours that people haven’t seen. To win this means so much to me. I’m going to cherish it forever, especially in the Pacific Northwest.”

“I’m not disappointed with the finish at all. He (Madey) hit a great shot into the last to seal it.”

Western Australia’s Win Woo Lee finished 7th at even par following a final round 74 with Sydney’s James Grierson three strokes back in a share of 12th place.

The in-form Karl Vilips could not get the ball rolling this week and had to settle for 29th.

Vilips added to his already impressive resume with a win at the recent AJGA Wyndham Invitational. In 2017, as a 15-year-old, he won the prestigious Polo Golf Junior Classic title and then followed that up with a victory at the Southern Amateur – equalling Bobby Jones’ age record.