Curtis Luck has defeated American Brad Dalke, 6&4, in the final of the US Amateur Championship being held at Oakland Hills Golf Club in Michigan.

The 20-year-old Aussie was 1 down after 19 holes of the championship match but then hit his straps, winning the next eight holes to take a commanding 7-up lead to set up the victory.

“While I was out there, he made a few errors, and of course the main thing is not to lose holes, but if he’s not in good position, that’s when you start thinking, ‘Okay, let’s win some holes’, said Luck following his win.

“I won a few through the early part of that second 18, and I think on 7 Brad hit this unbelievable shot, like it was ridiculous out of the rough, how good a shot it was in the circumstances, and it rolled up to about six feet behind the hole, and I was in the middle of the fairway now thinking, ‘Okay, I can’t let this great run that I’ve just had come to an end because it could be a big momentum swing, and there’s still plenty of golf to be played’.”

Luck, who is a well experienced match play exponent having regularly played the format in Australian events, including the Australian Interstate series and the state amateur events, kept his composure knowing that any slight let up on his part could easily open the door for his opponent.

“You know what, I think I handled myself really well today and at the WA Open, in fact, and I think that’s why I closed them out quite well having that experience,” said Luck.

“But you know what, at the end of the day, I took a deep breath, took my time getting to the 12th tee, and was fine by the time I got to the tee box.” 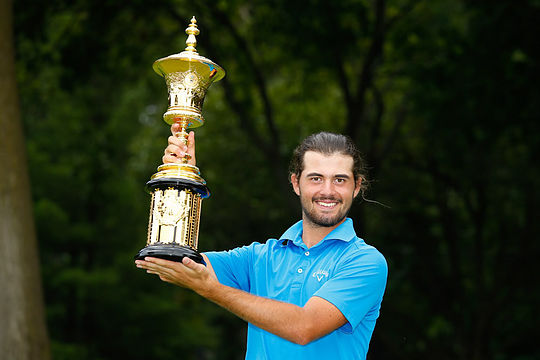 By winning his semifinal match against Nick Carlson on Saturday, Luck had already earned invites to the Masters and US Open. The victory on Sunday gets him a spot into next year’s Open Championship as well.

Luck had planned to turn pro in a few weeks and go to qualifying school in Japan and in Europe but that is all now on hold following the win.

“It’s obviously an amazing feeling to be named the US Amateur champion for 2016. It’s something I’ve dreamt of since I was about 16.”

“I’m super happy to say that I’m going to be an amateur for another however long, eight or nine months, get to play some unbelievable golf tournaments within those months, and I guess get even more experience for when I do turn pro.”

Australians now hold both the US Junior, following Min Woo Lee’s win last month, and with Luck’s victory, the US Amateur in the same year.