Australia’s Geoff Drakeford and England’s Ashley Chesters at 4-under lead the strong 228 international field following the half-way stage of the qualifying section of the 2012 British Amateur championship being held at Royal Troon and Glasgow-Gailes Links.

Drakeford carded five birdies at Royal Troon on the way to an impressive 67. 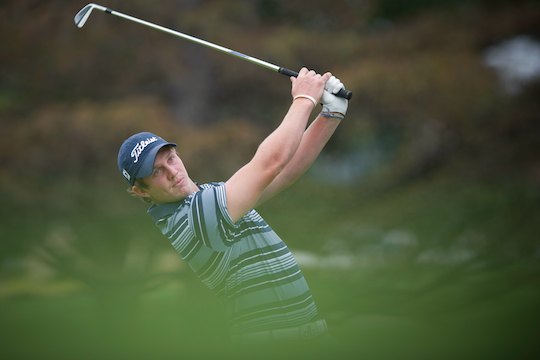 Australia’s Geoff Drakeford shares the lead at 4-under par at the halfway stage of the qualifying section of the 2012 British Amateur championship at Royal Troon and Glasgow-Gailes Links (Photo: Anthony Powter)

Drakeford, ranked 88th in the world and number six in Australia, was a quarter-finalist at this year’s Australian Amateur and was obviously pleased with his opening efforts.

“There is a lot on the line, I have a great incentive to win. I’ll go out there with the same attitude tomorrow.”

Daniel Nisbet is the next Australian firing an impressive 2-under-par 69 at Royal Troon.

In January, Nisbet won the Lake Macquaire Amateur and was runner-up at the Australian Amateur. His opening round at Royal Troon sees Nisbet inside the top-10 in a tie for 7th and he should make the elimination match play segment, which commences on Wednesday.

Jordan Zunic continues to have a fine tour in the UK, opening his first British Amateur campaign with 1-under-par, 70, at Glasgow-Gailes Links to be in a tie for 15th along with Queensland’s Cameron Smith after he also posted a 70 at Glasgow-Gailes.

Daniel Bringolf is a stroke behind in a tie for 41st after an even par round of 71 at Royal Troon.

The final round of the stroke play qualifying will see the top 64 and ties progressing to the match play stage of the competition.

Jake Higginbottom and Nathan Holman will need to make their move with the pair currently in a tie for 69th position after opening with rounds of 1-over-par 72 at Glasgow-Gailes.

Callan O’Reilly is in a tie for 104th position at 2-over-par and in need of a low round to make the cut.

Matt Stieger will also need a low second round to remain in the championship with the 2010 Australian Amateur champion opening with a 3-over-par, 74, at Royal Troon to be in a tie for 145th along with Rory Bourke and Brad Moules. They are currently two strokes off the projected cut mark.

Fourteen Australians entered the championship and with five hovering around the cut mark, there is still plenty of work to be done to repeat our efforts last year when Bryden Macpherson’s victory broke a 57-year Australian winning drought at the championship to became only the second Australian to win the Amateur Championship after Doug Bachli in 1954.