Australia’s Brett Drewitt will be very glad he made the last-minute decision to drive four-hours to Springfield, Illinois where he has won the $600,000 Lincoln Land Championship by one stroke.

The 29-year-old carded a final round 3-under 68 to claim the first Korn Ferry title in his 116th start and his first victory on any tour since the 2014 United Investment Real Estate Wuhan Open on the PGA Tour China. 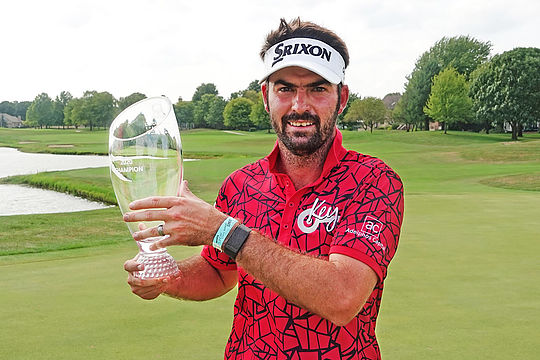 Drewitt, who hails from country NSW, held out England’s Harry Hall along with Americans Ben Kohles and Austen Truslow to claim the first prize cheque of US$108,000.

The win moves Drewitt from 73rd to 18th on the Korn Ferry Tour money list and puts him back on track for a return to the 2020-21 PGA Tour season, where he last played in 2017.

“I was talking to my parents last night and I was kind of thinking about how cool it would be to win on Father’s Day,” said Drewitt. “It’s surreal right now; it’s been a hard road over the last couple of years.”

“This year has been a rollercoaster. When I got to the PGA Tour, I led in ball-striking out here [in 2016]. I just trusted that I still had it, even if it might not show in my stats. And then the putts started dropping and that’s just the way it goes.”

Playing in the second-last group, Drewitt was forced to wait as rookie Austen Truslow attempted to make birdie and force a playoff. Drewitt stayed warm on the driving range but knew it was all over when a fellow Korn Ferry Tour pro came running over to shower him with beer.

“At that point I was just bracing myself for the beer to get sprayed all over me,” laughed Drewitt, who had previously made just six cuts from 19 events.

The New South Welshman now has the chance to step back onto the big stage if he can stay inside the all-important top-25 going forward.

Jamie Arnold was the only other Aussie to make it through to the weekend finishing in a tie for 22nd place while recent Nationwide Children’s Hospital Championship winner, Curtis Luck, failed to make the cut for the 8th time this year.

The Korn Ferry Tour stays in Illinois for this week’s Evans Scholars Invitational in Westchester.