Australia’s Richard Green has won his first title at the Jersey Legends in just the second start of his European Legends Tour season following a playoff with Scotland’s Paul Lawrie.

Green birdied the final hole of the 54-hole tournament to finish on 10-under and force the duo into extra time. Both players finished with identical rounds of 67, 68, 71.

Green and Lawrie parred the 17th and 18th holes to remain all square before the playoff headed back to the par 4 17th hole where Green secured with victory with a par against the Scot’s bogey.

The Victorian has now won a title in every decade since turning pro in 1992.

“I feel fantastic,” said the 51-year-old Green. “Obviously to play that well under that pressure in the closing holes was very pleasing, I haven’t been there for a while I’ve put myself in some situations over the years which has been very testing but it’s just nice to come out on top.” 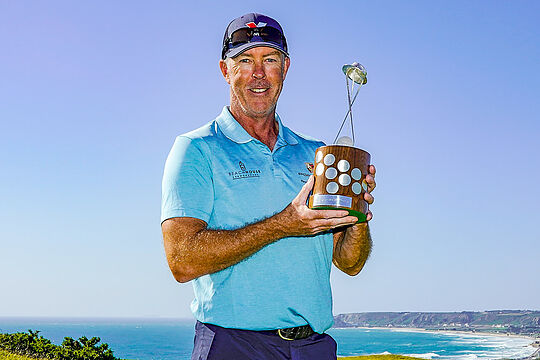 “I was about as nervous as it gets, to play against Paul in the heat of the battle it’s a tough exercise which meant I had to play my best golf to win.”

“He has had a great career and won many tournaments and won The Open and I knew it wasn’t going to be easy so yeah I felt really nervous but I’m really pleased that I managed to pull the shots off that I needed to.”

Kiwi Michael Campbell took outright 6th on 6-under with Peter Fowler (T14) and Michael Long (T17) rounding out the Australasians in the 60-man field.