Smith carded three birdies on both the front and back nine en route to a three-stroke win over Lousiville, Kentucky native Leah Wigger. 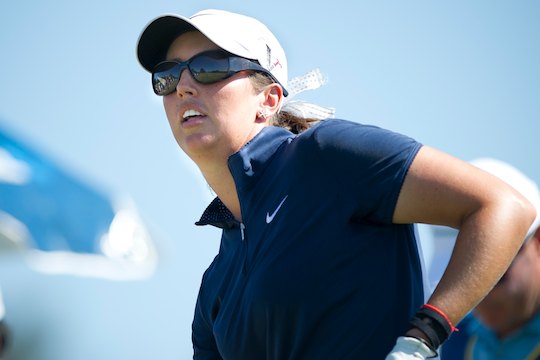 Smith’s final-round 6-under par 66 was her lowest score of the weekend and helped her tie the 54-hole tournament record of 13-under 203 (par 72). Wigger carded two birdies on both the front and back nines with her lone bogey of the day coming on the par 4 No. 3.

Smith had the most pressure from Wigger throughout the round but started pulling away after No. 11

“It was a little pressure coming into the back nine,” said Smith. “Leah kept putting a little bit of pressure on me. I knew I had the one shot lead and knew if I could get a few birdies coming in I’d feel a lot more comfortable.”

Wigger birdied the par 5 No. 11 to get within one shot of Smith but didn’t get another until the 18th, when it was too late. Smith rattled off back-to-back birdies on Nos. 14 & 15 and sank a 15-foot putt on No. 18 to seal the deal. She said staying in the moment was critical in finishing out the way she did.

Just three months ago Smith was debating whether to continue her career as a professional golfer.

Disappointed that she had not made it to the LPGA Tour in three years, the Perth, Australia native even looked into universities back home to continue her education and went the longest time in her life without picking up a club.

“I worked out a lot,” said Smith. “I didn’t touch a golf club for at least a month and a half. Kind of looked into schooling back home at universities and speaking to my mind coach Sean Lynch.”

Smith credits Lynch for helping her gain any confidence she could find and to get enough motivation to get back to the game.

“He’s been amazing and has helped a lot,” said Smith. “He works with a lot of guys on Tour and I’m his only girl so I feel pretty special in that sort of sense. I pretty much owe it to him for trying to get me back out here and get firing again. This win is huge; it’s given me a lot more belief. I’m ready to come out firing.”

Now with her confidence at an all-time high, Smith is looking forward to getting a few more wins this season to solidify a Tour card, something she’s been eyeing her entire career. When asked which win was bigger for her, without hesitation said today’s win means much more.

The Tate & Lyle Players Championship was just Smith’s third start of the season. With a top-10 finish last week in Iowa and a bogeyless win this week, she’s in great position to make a run in 2012 and reach her ultimate goal of making her way onto the LPGA.