Victorian James Marchesani has secured a top-5 finish at the Haikou Championship on the PGA Tour Series-China to be the best of the Australians in the PGA Tour feeder tournament.

At one stage. Marchesani held a three stroke lead before play was suspended due to weather. Upon his return he made a double-bogey on the 16th hole which saw his lead reduced to one shot from China’s Zheng Ouyang heading into the final round. 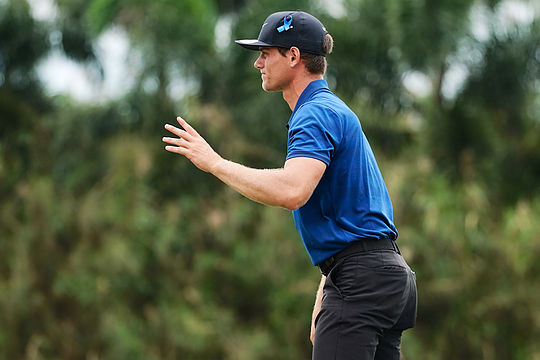 But Marchesani was not able to keep his momentum going. A costly double-bogey at the par-3 eighth saw him make the turn at 1-over for his round before firing birdies at 10 and 13 to keep his hopes alive. Another dropped shot at the par-3 17th left him three shots adrift of the playoff.

American David Kocher beat Japan’s Yuwa Kosaihira with a birdie on the first extra hole to claim the title. Kocher completed a 3-under 69 in the morning in the completion of the weather-delayed third round and shot a 66 in the afternoon.

Byrden Macpherson and Max McCardle both secured top-20 finishes at 3 and 2-under respectively for the week with Kevin Yuan a further shot back in a tie for 26th. Charlie Dann also made the weekend finishing in a tie for 42nd.

Marchesani has been playing on the PGA Tour of Australasia since 2017 and has recorded a T2 finish at the Fiji International and a T3 finish at the Victorian PGA Championship.

This is his second season playing in Asia with his best finish a tied 4th at the Qinhuangdao Championship in September last year. Following the weekend his world ranking climbed from 906th to 821st.