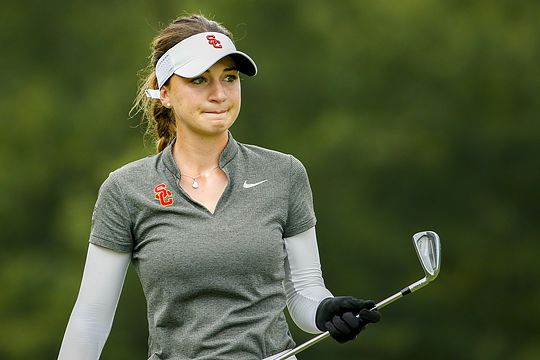 Ruffels, 19, a rising junior at the University of Southern California who is No. 52 in the WAGR, was also taken the distance against Valenzuela’s Stanford teammate and world No. 2 Andrea Lee, 20, of Hermosa Beach, Calif., before posting a 2-up victory.

“I was actually kind of surprised early,” said Ruffels of opponent Lee, a player she beat last October, 2&1, to secure the East Lake Cup for USC in the final against Stanford.

“I’ve never played a 36-hole final but starting the week this is where you want to be,” said Ruffels, whose victory over fellow Australian Doey Choi in the North & South final was over 18 holes. “No complaints. I’m really looking forward to tomorrow.”

Valenzuela, the 2017 Women’s Amateur runner-up, and Ruffels, the winner of last month’s North & South Women’s Amateur at Pinehurst, are each seeking to win their country’s first Women’s Amateur title. Libby Goggin (1981) and Anne-Marie Knight (1995) are the only Australians to previously advance to the title match.