Avondale Golf Club has taken out the 2020 Eric Apperly Shield in a thrilling final against defending flag holders, St Michael’s, following two extra playoff holes to seperate the teams after the matches finished 3-3.

With the teams tied in regulation play, managers selected one team member each to play sudden death extra holes which saw Harrison Crowe from St Michael’s and Chris Fan from Avondale engaging in a great battle. 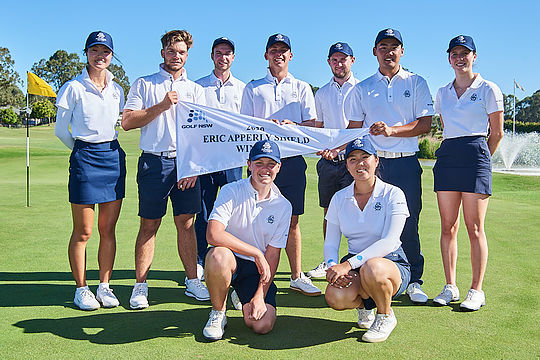 With Crowe’s putt conceded, Fan needed to drain his attempt to keep Avondale alive and he did just that to pull his team from the jaws of defeat.

It was a huge body blow to the St Michael’s outfit and clearly swung the momentum in Avondale’s favour heading to the the short par-3 second at Twin Creek Golf & Country Club in Sydney’s West.

Fan, with the honour, hit his approach over the pin to the right edge of the green, opening the door for Crowe to get his shot inside.

Crowe pulled his shot short and left of the pin to be on the lower level leaving a difficult putt and after his ball rolled 3 meters past the cup, Fan was in the box seat to roll his putt to conceding distance but also pushed his putt 2 metres past the hole.

After Crowe was not able to make par, Fan confidently rolled his into the hole to secure Avondale’s first shield flag since 1965.

This year’s format introduced for the first time women competitors who could be matched against males, playing off a reduced length course of 15% less, which certainly added a new dimension.

With golf competitions for our elite amateurs a rarity, given the COVID-19 response and associated cancelation of national title events, full credit is to be given to Golf NSW in staging this new format.

Avondale has traditionally been very strong in junior development golf across both genders and entered an exceptionally talented combined team.

Certainly the number 2 win Avondale obtained with Grace Kim holding off Jordie Garber, both NSW state players, proved pivotal to the final result. That was a great match to watch and was a nail-biter all the way to the 18th.

But where Avondale was able to win this flag was in the depth of the top order. William Bayliss, playing 3, disposed of Weiliang Wang, 4&3, which proved vital after St Michael’s had posted three match wins from the lower order matches and looked to be in the box seat.

Jeffrey Pullen at number 6 for St Michaels was in stunning form winning his match against William Moody, 5&3, with Pullen reportedly carding the equivalent of 4 under and deserves special mention.

Daley Loumanis won 3&2 over Callum Sharp and Kelsey Bennett won 2-up in another classic encounter against June Song.