There were plenty of calls for Augusta National Chairman Billy Payne to chastise Tiger Woods for his unsavoury behaviour at this year’s Masters. 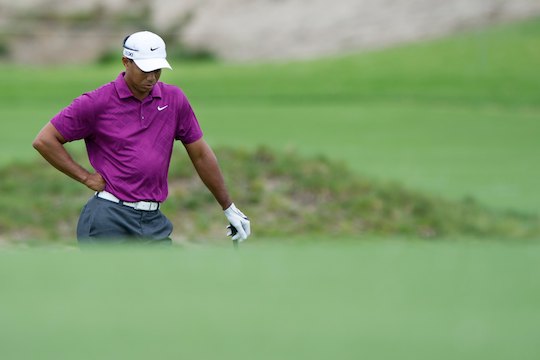 Woods came to this year’s Masters as a raging red hot favourite but heading to the weekend he was in freefall.

Woods was back in the firing line on Friday with the 14-time Major winner cursing and swearing and lashing out – kicking his club after a full shank into a bunker at 16.

TV easily picked up Woods cursing and so much so that SKY TV’s Bruce Critchley felt the need to strangely apologise for Woods clearly using the word ‘shit’ after yet another indifferent shot.

“I just didn’t quite have it with my swing,” Woods said afterwards.

“One of the good things about this tournament is that anybody can win it who makes the cut. Guys have been five or six behind going into the back nine on Sunday and won. I just need to work at cutting that deficit down and make a quick start on Sunday.”

“Tiger’s antics at Augusta were an embarrassment to the game, the membership at Augusta,” said Azinger who captained the 2008 USA side that Woods was a member.

“I was really disappointed to see him carry on that way. He’s not trying to endear himself to anybody.

“And after he won Bay Hill I thought, ‘here we go again, this is going to be Tiger just kicking butt and taking names.’ I don’t know. I thought he acted like the south end of a northbound mule.”

And as for Woods’ game, Azinger commented: “His brain is full of swing thoughts, not swing feelings.”

“He thinks he needs to know it all so he can fix what’s wrong, but that’s not what happened here,” said Azinger.

“When it started to go off he didn’t have a go-to shot, there was nothing he could do.”

“I can’t compare my career to Tiger Woods’ career for sure, but I’ll say this, in the 28 years I’ve played golf for a living I’ve never been as lost as he looked out there.”

The only good news for a completely demoralised looking Woods is that his troublesome Achilles injury appears to have healed.