Baddeley, 35, shot five-under 66 and Kim carded a sizzling 63 in the final round as tournament leader Jhonattan Vegas faded as the pair finished at 18-under.

When Baddeley saw his 24-foot birdie putt turn in toward the cup in a sudden-death format after he and Kim had both parred the par-four 18th twice and the par-three 17th before returning to 18th, he raised his arms in relief after his 134th start since his last win.

“It’s been tough at times, but this year has been really good, I’ve played really well,” said a relieved Baddley following the win.

“I felt I had a good chance today even though I was starting three back. I felt so good, I was driving the ball as good as I’ve ever driven it.” 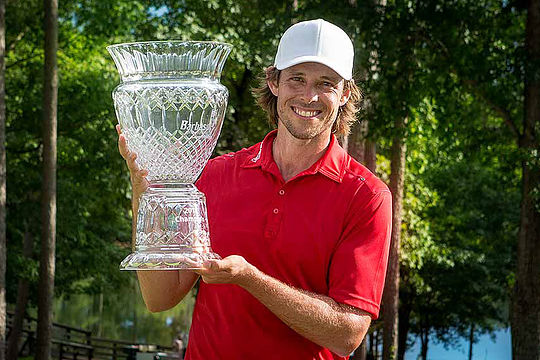 The Aussie secured a two-year exemption and a spot in next week’s PGA Championship, but not the Masters.

It was Baddeley’s fourth PGA Tour title but the first since the 2011 Northern Trust Open and he has been playing only on limited tour status as a past champion this season.

As a teenager Baddeley was seen as one of the most promising talents in world golf. He was the youngest player ever to represent Australia in the Eisenhower Trophy and in 1999 at 18 won the Holden Australian Open as an amateur and retained his title in 2000, by which time he had turned professional.

In 2005 following a number of years on and off the PGA Tour he moved back up the rankings to 78th and in 2006 he won his first PGA Tour title at the Verizon Heritage.

Baddeley won his second PGA Tour tournament in early 2007 and reached the top 50 of the world rankings. By September, he had entered the top-20. His career high ranking was 17th in 2008.

After a lull in form over the following few seasons, which had Baddeley finishing in the lower reaches of the top-125 on the money list, he returned to the winner’s circle when he secured the 2011 Northern Trust Open in California.

He started the 2015–16 season playing out of the Past Champions category after finishing 157th in the FedEx Cup and failing to regain a PGA Tour card through the Web.com Tour Finals.

“I think you could tell by my reaction how much it meant to me,” said Baddeley, who described last year as the worst of his career.

“It’s been a long time between drinks,” he added.