Bae finished at 19-under, closing with a 5-under 66 at Hillcrest Country Club to edge out Anders Albertson, Roger Sloan and Adam Schenk.

The 32-year-old Bae returned to the PGA Tour this season after two years of mandatory military service in South Korea, but lost his card with a 202nd-place finish in the FedEx Cup standings.

The two-time PGA Tour winner entered the week needing only to secure a top-20 result to regain playing privileges yet walked away with a victory.

“I thought it would not take that long [to get my game back], but I have struggled for almost a year,” said Bae.

“My game is not that much different, but maybe a little mentally. It’s a little different in my mind because I feel like I’m back to being a rookie. More humbled and more patient.” 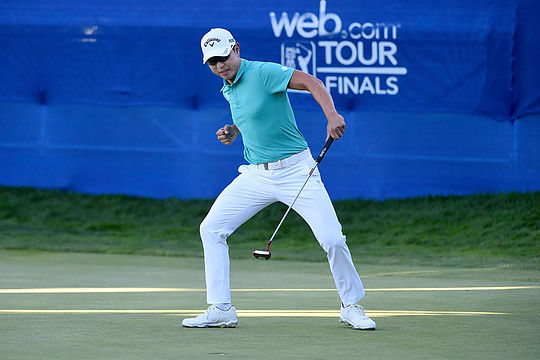 The Web.com final series features the top-75 players from the Web.com regular-season money list and Nos. 126-200 in the PGA Tour’s FedEx Cup standings. With one tournament left, the Web.com Tour Championship next week at Atlantic Beach Country Club in Florida, a number of Aussies are aiming to secure playing rights with a solid finish.

Aaron Baddeley recorded his third consecutive top-25 finish on the weekend and moved to No. 22 on The Finals 25 money list. Sitting on the bubble, he will need another strong showing at the Web.com Tour Championship to lock up his card for the 2018-19 Tour season.

Curtis Luck had a tied 24th finish on Sunday and despite a missed cut in the second finals event and a T24 in the last two events, a T5 finish in the first Finals event allowed Luck to stay inside the top-16 on The Finals 25 money list and in a strong position to be elevated to the main tour.

Of the 25 golfers who are currently in position to earn PGA Tour status via The Finals 25, only five would be earning a spot on TOUR for the first time including Davis, Seth Reeves, Dylan Frittelli, Luck and Jim Knous.

Stuart Appleby, Brett Drewitt, Rhein Gibson and Cameron Percy all have left their run too late and are currently well outside to top-25.