Wayne Player, the son of nine-time major-winning Gary Player, has been banned from ever attending The Masters or visiting Augusta National Golf Club again. 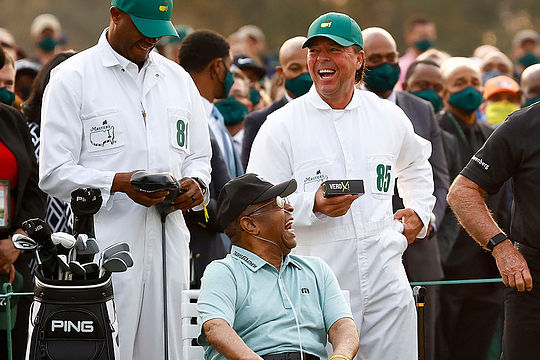 Player, 58, and dressed in Augusta National caddie attire, was spotted in the background holding a sleeve of ‘OnCore’ golf balls.

Player had joined Lee Elder, Jack Nicklaus and his father on the first tee ahead of the official start to play in the 85th Masters.

Elder was introduced by Augusta Chairman, Fred Ridley but with an injury preventing him from joining Player and Nicklaus teeing-off in the now annual ceremonial opening tee shots.

What Gary Player had to do with the publicity stunt is uncertain given he has been an ambassador for ‘OnCore’ golf balls since 2019 but how he did not say something to his son continues to amaze many observers.

And it did not take long for eagle-eye viewers of the early morning TV coverage to get onto social media and slam Wayne Player’s action.

One of those was estranged son Marc Player, who described the incident as “embarrassing and illegal ambush marketing” and “tone-deaf”.

“Wayne has since correctly been banned from Augusta National and The Masters tournament. What a shame. What an embarrassment. What a bad decision to allow him on the first tee after years of similar shenanigans. My apologies to all,” said Marc.

It was not the first time Wayne Player has been in trouble during Masters week as back in 2018 a civil suit and an arrest warrant was issued when he skipped paying for fees for a rented house.

A representative from OnCore were very clear they ‘did not instruct’ Player to “have our ball sleeve visible” during the ceremony.

“We are aware of the criticisms that have been raised as a result of our product being displayed by Wayne Player at this morning’s ceremonial tee shot at the Masters, most specifically during the introduction of Lee Elder, one of golf’s trailblazers,” tweeted OnCore Golf.

“We did not ask or instruct Mr. Player to have our ball sleeve visible during the ceremony and are sorry if his actions caused any offense or was a distraction from the wonderful recognition being paid to Mr. Elder.”