Matthew Ballard has beaten a host of international professionals to take out today’s Bartons/BMD Pro Am held at the Wynnum Golf Club.

With an 8 under par round of 62, Ballard’s score was almost null and void when a freak storm cell struck the course with just 21 players still to complete their rounds. Lucky for Ballard and the other 27 players who completed under par rounds, most of the professionals went back out in what were treacherous conditions in an effort to complete the tournament. 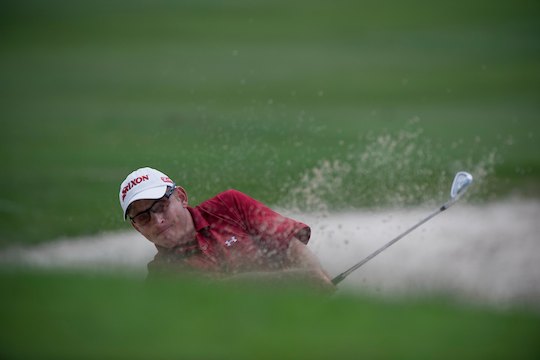 Records were broken last year with its 30th anniversary celebrations and it has been no different in 2010 with the Pro Am again having the largest prizemoney for a one day Order of Merit Pro Am in Australia.

Doug Barton from Bartons Bayside was influential in starting the inaugural Pro Am in 1979 and continues to strive to make the Pro Am one of the biggest in Australia.

“On the back of the success of the last years Pro Am, we are really happy with the support we have received from sponsors and professionals. It has been great to see the Pro Am continually rise in statue and we look forward to building on this again next year”

In addition to today’s storm, the course was in great condition considering the club was afloat on Sunday afternoon with more than 250mm of rain falling on Saturday night. It was only a decision by the Pro Am committee on Tuesday “The boys worked really hard over the past two days to get the course up to standard and I would really like to thank them for their efforts” Wynnum Golf Club professional Matthew King remarked during presentations.

For Ballard, the $7,560 in prizemoney is not only a great Xmas present, it will help set up what we hope will be a successful 2011.

“2010 has been a mixed year for me including some great highs like the birth of my first child, and a few lows like missing the chance to play the Australian PGA last week. That being said though I head into Australian Qualifying school in Melbourne next week with renewed confidence in the attempt to regain my status on the Australasian and One Asia tours”.

The professionals now head to Hope Island tomorrow for the final event of the year The Peter Senior Charity Pro Am at Links Hope Island. After Senior’s success last week a big crowd of corporates and spectators are set to be apart of the final event on the QLD Sunshine Tour for 2010.