Woods got off to a brilliant start birdieing the first and fourth holes to race to two-under but let slip the chance to go three-under at the par-5 sixth hole before making the turn at two-under.

The 14-time Major winner dropped a shot after finding a fairway bunker on 10 but bounced back with a birdie on 11 before bogeying the 13th and 15th in the increasingly windly late afternoon conditions.

Woods posted three solid closing pars to end the round sharing 32nd place and only five shots behind fellow American Kevin Kisner, who ended his round near lunch with a five-under par on the par-71 championship layout.

“I think it played a little on the quick side out there this afternoon, the balls were definitely rolling and I thought I played a pretty solid round and unfortunately I didn’t take care of both par 5s,” he said.

“I had 8-iron into both of them, and made par on both of those and had a little three-wiggle there on 13. So the round certainly could’ve been a little bit better.” 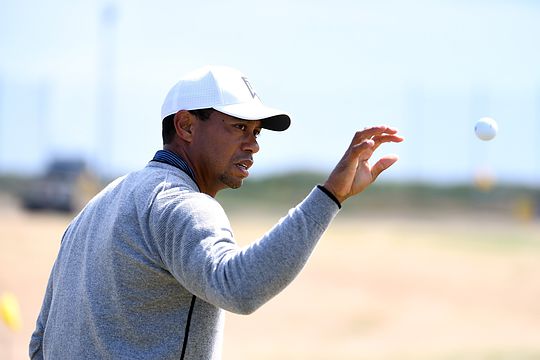 And when asked about the adhesive tape on his neck Woods said: “I’ve been taped up, bandaged up and just you were able to see this one. It’s no big deal, (you’ve) just got to play.”

“It’s all right. Just helping me support my neck a little bit. Makes me feel a little bit more comfortable.”

He also said this isn’t the first time he’s played a tournament round with some sort of brace or support to compensate for an injury.

“Everyone acts like this is the first time I’ve been bandaged up,” he said. “I’ve been doing this for years, braces and bandages, just that this time it’s actually visible.”

In 2010, Woods withdrew from The Players with an inflamed facet joint in his neck, but he’s given no indication of any recent injuries to his neck.