Phillip Barbaree overcame a five hole deficit to defeat Andrew Orischak to match the largest comeback in US Junior Amateur history to win the US Junior Amateur Championship at the Colleton River Plantation Club in Bluffton in South Carolina.

Trailing 5 down with eight holes remaining, Barbaree, No. 59 in the World Amateur Golf Ranking, managed to rally for a 37-hole win and matched Andy Hyeon Bo Shim’s comeback three years ago at the Golf Club of New Hampshire for the largest comeback in the event’s 68-year history. 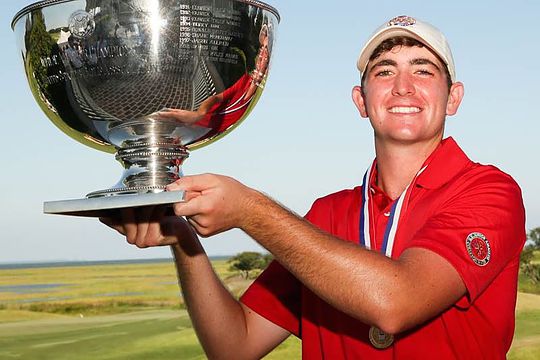 “It’s definitely the biggest junior tournament out there and to win it means a lot,” said Barbaree, who has the same Dallas-based instructor (Cameron McCormick) as 2015 US Open champion Jordan Spieth.

Barbaree joins an impressive list of past US Junior Amateur winners, including Tiger Woods (1991-92-93) and Jordan Spieth (2009,11) who are the only players to win the title multiple times.

As US Junior Amateur champion, Barbaree receives exemptions into the next two US Amateurs including next month’s championship at Olympia Fields Country Club and at Oakland Hills Country Club in Bloomfield Hills in 2016. He also is exempt from US Open local qualifying for the next three years. Orischak also is exempt into the 2015 US Amateur and from U.S. Open local qualifying next year.

The US Junior Amateur Championship is open to amateur boys who are under 18 on the last day of the competition and have a USGA Handicap Index of 6.4 or less.

Defined Players are exempt from Sectional qualifying including if they are ranked in the top-400 of the WAGR, as well was players who made the quarter-finals or better in the previous year at the event.

Sectional Qualifying, played over 36 holes, was conducted between June 15 and July 1. Qualifying was held at 60 sites in 43 states throughout America.

The US Junior Amateur was established in 1948. It consists of two days of stroke play, with the leading 64 competitors then playing a match play competition to decide the champion.

Only one Australian, Gold Coast native Jack Trent who is now based in the US, qualified for these championships. This is an event our golf administrators need to focus upon within our junior development programs and why more attention has not occurred in the past towards getting our promising juniors to compete has been to our loss.