Kim carded rounds of 66, 70, 71, 70 and took full advantage of her home course finishing at 11-under-par for a stroke win over Japan’s Tsubasa Kajitani, with New Zealand’s Fiona Xu in third place at 8-under. 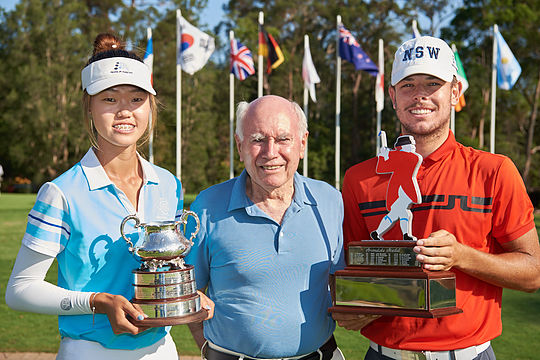 Kim was ecstatic with her win, particularly with a strong local gallery watching her move over the last six holes to claim victory. It is her second victory in the past two weeks after claiming the NSW Amateur title at St Michael’s.

“It was tough out there coming in and I had to play some good golf under the pump to get this win,” said Kim.

“The members of Avondale have done a lot for me here, to win this at Avondale is something special. It was not until the last hole that I managed to get ahead. But to me it’s a special win.”

The Avondale layout again presented a stern challenge for the field and full credit goes not only to the green staff, but the club members who run a very smooth and effective tournament. No detail was left outstanding and it’s easy to see why this event continues to grow each year into a ‘must play’ for elite amateurs.

The men’s tournament came down to the battle of the last group between England’s Benjamin Schmidt, winner a fortnight ago at the NSW Amateur, and local Nathan Barbieri, with the pair exchanging holes over the closing stages.

Barbieri was hungry for his first national amateur title after runner-up finishes last year at the NSW and Australian Amateurs, yet the 17-year-old Schmidt was relentless in pursuit of another international title.

On the 17th, a short par 4, Barbieri made his move with a birdie against Schmidt’s bogey and headed up the last with a nice three shot buffer. Then Barbieri’s drive went left and into a hazard leaving him standing at three with over 200 metres to the green and Schmidt safely in the fairway following a stellar tee shot.

The match had tightened and the strong gallery were eyeing off the prospect of a possible three-hole playoff.

Then Barbieri played arguably the shot of his career with a three iron to the front edge of the 18th green setting up at worst a possible five and putting the pressure back on Schmidt, who then over-hit his approach into the left side bunker and in the process short-sided himself to a tightly tucked back pin.

Barbieri rolled his putt to within a safe distance and Schmidt was not able to get his bunker shot close. Barbieri made no mistake with his putt to claim a three stroke victory finishing at 16-under-par, after Schmidt missed his putt coming back.

“I’ve been so close so many times, today was my day,” said Barbieri.

“I probably hit the shot of my life there going into 18, a three iron, it was just a shot that I needed and I pulled it off. What a relief, a win like this is just magic, I’m still numb about it.”