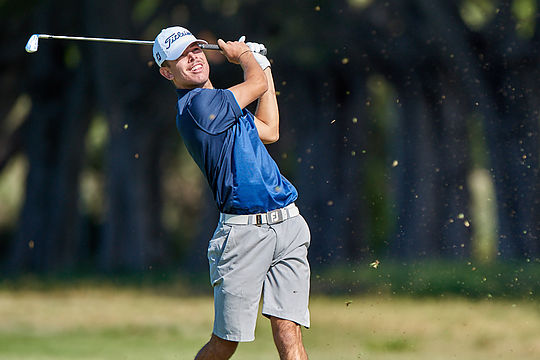 The leading 16 women players from the Stroke Play Championship will be eligible to compete in the NSW Amateur Championship Match Play with both the men’s and women’s titles being contested over a 36 hole final at Terrey Hills Country Club on Friday.

The Men’s championship has produced a strong mixture of Australian and international players doing battle.

Local Nathan Barbieri will be looking to go one better than his runner up finish last week at the Australian Amateur where he was pipped on the first playoff hole by Irishman Connor Purcell.

Barbieri is one of a number of marquee NSW player in the lineup that includes, to name a few, Jordan Garner, Blake Windred, Harrison Crowe, Jye Pickin and Josh Armstrong.

There are also a number of English internationals competing including Benjamin Jones, Jack Hawksby and Bailey Gill.

Keep an eye out also for Canada’s Joey Savoie who scored an albatross on the West Course at Royal Melbourne during the recent Australian Master of the Amateurs before securing a top-6th finish.

Savoie is Canada’s top-ranked amateur and made the quarter finals last year in this event and has claimed a number of titles including the 2017 Tailhade Cup, 2018 Tennessee State Open and was co-medallist at the 2018 US Amateur qualifying.

In the women’s championship Doey Choi, Grace Kim, and Stephanie Kyriacou – a winner two weeks ago at the Australian Master of the Amateurs at Royal Melbourne – head up the Aussie contingent along with Kelsey Bennett.

These championships tend to deliver a international feel with many of the past winners being internationals. England has dominated the men’s title for the last few years and South Korea has been successful in the women’s championship.

In 2017 at Terrey Hills Country Club, England’s Scott Gregory defeated fellow countryman, Marco Penge, 1-up, and in the women’s final Somi Lee secured the title in a tight match against her Korean counterpart Hye Jin Choi, 2&1.