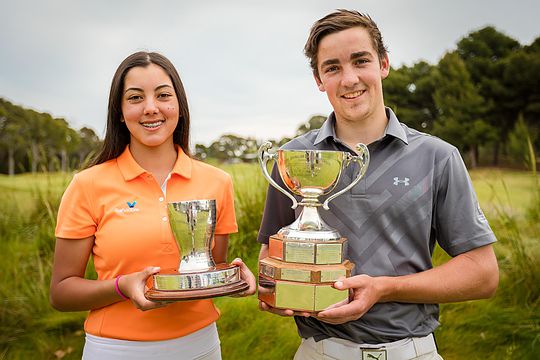 Barker is the first Glenelg member to win the South Australian Men’s Amateur Championship since Ben Tuohy in 2003. It was Barker’s first state title for the 16 year-old member of the Golf SA High Performance Team. Barker is also another promising talent under the watchful eye of super elite coach Gareth Jones.

“The first nine I got off to a good start, I was bogey free and made a couple of putts and I was 4up after nine, so it was the perfect start,” said Barker.

“I tried to stick to my game plan for the whole week, which was to play the percentage shots and hit greens in regulation and I knew if I did that, the putts would fall eventually so I stuck to it and it worked for me.”

Barker has a solid schedule over the next few months up until the Australian Amateur in January.

“Hopefully this can kick off a big summer of golf for me,” said Barker. “I’ve got the Keperra Bowl coming up, followed by the Aaron Baddeley Australian final and then after that I’m probably going to focus on school a bit with year 11 exams.”

“If all is well I will hopefully play the Dunes at the end of November and the Greg Norman Junior Masters before Christmas.”

It was a big day for the Glenelg Golf Club with with the Club represented by both finalists and Jenny Lee in the women’s final.

Lee was not able to hold off Victorian Stephanie Bunque in the final played at Kooyonga and both went into the match having not previously played each other.

“I was just trying to maintain what I already had, and not try and do anything silly, just play really conservative and not worry about what Jenny was doing and try and play my own game and play against the course.”

After 27 holes, Bunque moved to 5up but the margin was reduced back to two with two holes to play.

“I made a couple of slip ups, I lost a few holes in a row but I still stuck to my own game plan.”

With Bunque two ahead and a hitting a great second shot to find the green on 17, the 17-year-old was able to secure the title to earn her biggest win to date.

“It’s just awesome, it’s my first big win and it has really given me a huge confidence booster into the summer tournament season I guess, like a self-motivator, now I know I can do it.”