Lachlan Barker and Amy Chu have won the Golf SA Junior Amateur Championship held at the Kooyonga and The Grange Golf clubs in Adelaide.

Barker, a local who plays out of Glenelg Golf Club fired rounds of 66-65-74 to finish at 7-under and for a seven shot winning margin from Harrison Crowe. 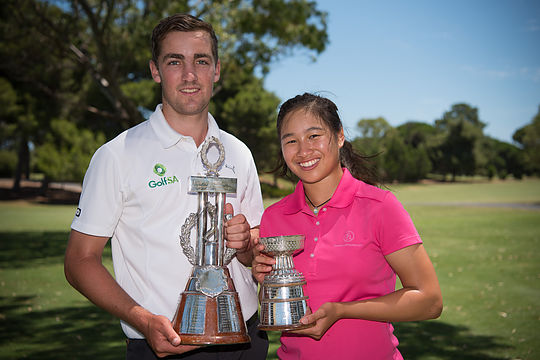 Crowe had earlier fired an opening round of 66 to be joint first round leader, yet Barker’s second round of 5-under-par 65 around the modified par 70 layout at Kooyong gave the buffer the local wanted heading into the final round which was played at The Grange.

Mitch Varley from Sanctuary Cove finished in outright third position at 5 over, with Adam Brady, Joshua Greeg and Kieran Vogels in a share of 4th position.

Barker, who won the 2016 Malaysian Amateur and South Australia Amateur, moves with this win to number 7 on the Australian Junior Boys rankings.